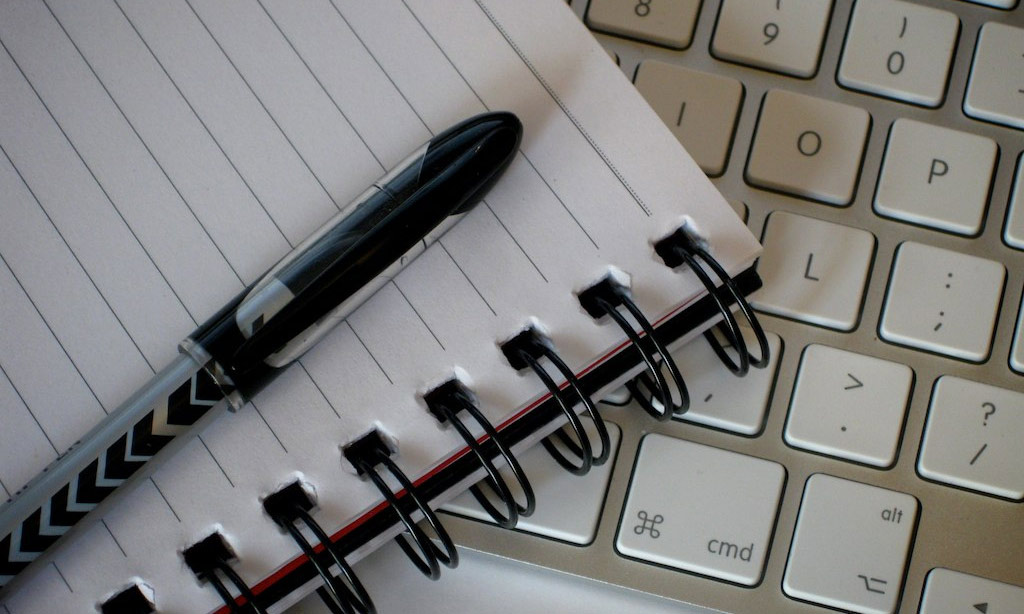 Want to hear about my short-lived career as a teenaged female wrestler? Or how about the time I took my dog to pet Reiki? Perhaps, I can indulge you in the advice an escort gave me on selling myself to strangers online.

Did that get your attention? That’s the point. These articles, as seen on Vice.com, represent the growing trend of personal essays in journalism, which is seeping onto the pages of other news organizations like The New York Times, which is currently running a series called “Couch” that explores the intricacies of therapy through essays written by psychotherapists and patients.

Eve Fairbanks, a contributing editor at The New Republic, addressed this in a recent column for The Washington Post called “How personal essays conquered journalism—and why they can’t cut it.”

In an interview with AJR, she explained that the overuse of personal narratives in journalism could lose an outsider’s view, which is often very necessary in painting an accurate picture of a prominent issue.

“In the course of reporting my piece, some people speculated to me that we’ve gotten a lot more familiar with the first person due to Facebook and blogging,” said Fairbanks.

Personal narratives are the bread and butter at news sites like Vice and “have an eyewitness, citizen-journalism, on-the-ground quality that people like,” according to Fairbanks.

Fairbanks explained that when she got her start at The New Republic, the magazine had a “Diarist” section where editors and freelancers wrote page-long personal reflections on current events. So while the appeal for this style of writing is not novel, Fairbanks believes it is probably growing.

Personal narratives aren’t necessarily detrimental to journalism. Sometimes it’s important for a writer to establish him or herself in an article for the sake of the audience, according to Fairbanks.

“I don’t know how much we lose by inserting ourselves in stories,” said Fairbanks. “My own method has always been to make my presence clear in my reporting. I think we lose something when we write mainly about anecdotes that already happened in our own lives instead of going out and seeking stories.”

Jamie Lee Curtis Taete, Vice’s west coast editor, contacted by AJR, said he did not feel he was qualified to weigh in on narratives in journalism because “the majority is experiential writing and doesn’t really include much actual reporting.”

“I would say I’m more of a ‘blogger’ than a journalist,” he added, in an email.

AJR spent a week combing through Vice to learn more about immersion reporting, which the arts, culture and news website embraces. Here are three examples of first-person narratives you’ll find on Vice: 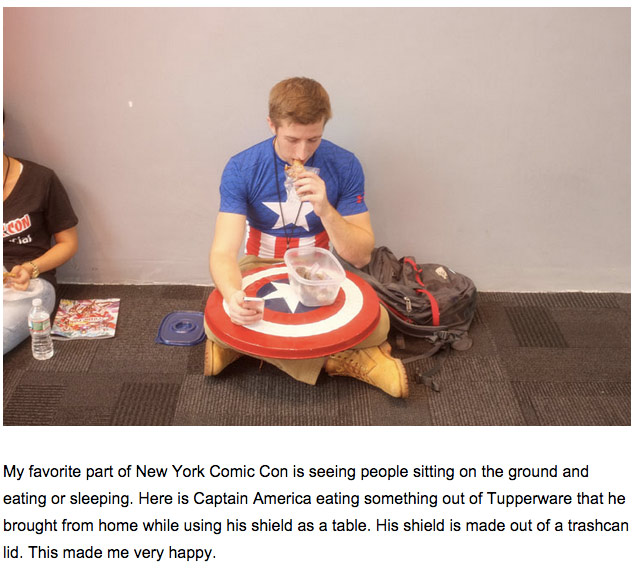 Vice features many stories from the perspective of writers who actively participate in and experience an intriguing event. For example, an article by Nick Gazin called “New York Comic Con is the Best Thing in My Life” follows Gazin’s four-day exploits at New York Comic Con, an annual fan convention celebrating all things pop culture. The story includes an interview with a panel of cast members from the animated FOX show “Bob’s Burgers,” a long anecdote from comedian and director Kevin Smith about quitting sugar and many photographs, including one depicting a man dressed in a Ninja Turtle costume signed by the actors from the 2014 film. Organized chronologically, the piece is free-flowing, personal and honest (“I hope you enjoy reading it. If you don’t, you can just look at pictures of people in cool costumes,” Gazin wrote in the article’s introduction) with a word count of 3,368. Vice writers have also told first-person stories of joining a Cosmopolitan Election Day campaign and attending a singles mixer for potheads. Recently, the site published an essay about spending the night patrolling with a Canadian superhero named LightStep, which would also qualify for the next category of Vice narratives.

The Outrageous and the Outlandish 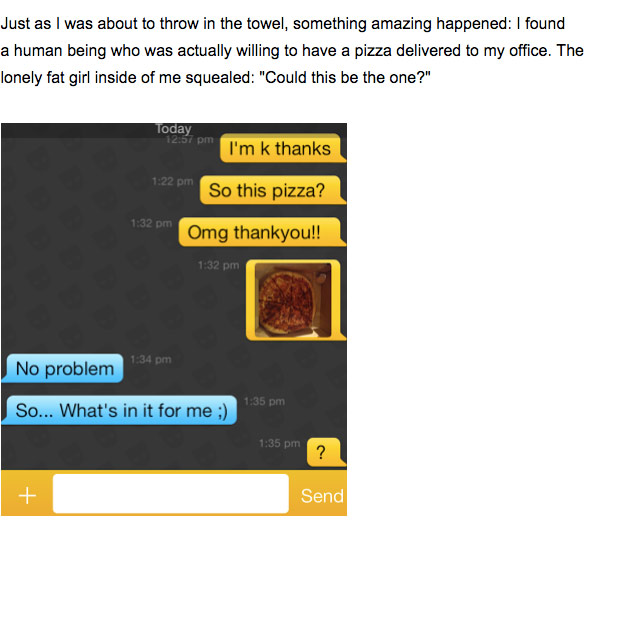 A Vice article featured the efforts of several writers who tried to convince people via an online dating app to buy them stuff, like pizza. (Screenshot)

Many of Vice’s stories are designed to get readers’ attention. This is true of many of the personal essay stories, like one entitled “My Grandma the Poisoner.” The narrative, written by novelist John Reed, dramatically profiles a complicated but allegedly abusive woman. It’s interesting because Vice has several articles like this that aim to grab a reader’s attention before surprising them with a story that taps into something relatable and powerful. A quick scan of Vice’s most popular recent posts shows the success of these articles, with top stories like one that covered a “Hunger Games”-inspired protest in Bangkok and another where various writers trolled the online dating app Grindr and tried to convince the people they were dating to buy them stuff.

Fairbanks explained that these types of stories have value in today’s media landscape.

“It helps the writer stand out [and] claim uniqueness in an era when there are nearly infinite competing voices on blogs offering analysis, creating a crisis of authority,” said Fairbanks. “So your or my analysis of Obama’s presidency might be no more special than anybody else’s pontificating on the Internet, but that person whose grandma is a poisoner is probably one of the few people who can speak to that experience.” 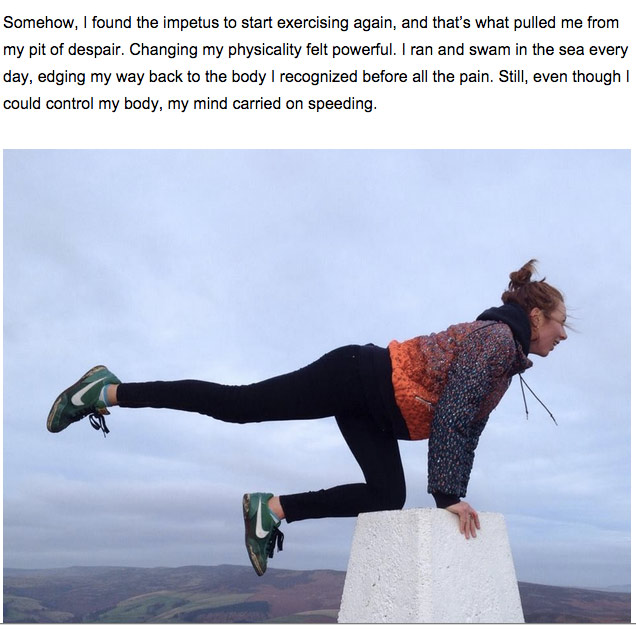 A Vice writer (pictured) shares her personal story of having a miscarriage, and how exercise has helped her cope. (Screenshot)

The most powerful narrative stories come from painful personal experiences—this is the motor behind the first-person narrative movement in journalism. It’s no different at Vice, where you can find many stories of personal struggle, whether that be growing up gay in Communist Romania or suffering a miscarriage. The latter story, by Kate Merry, details going through a miscarriage and the psychological trauma that plagued her. She uses her personal story to open a discussion about the stigma attached to miscarriages and why this still exists. One writer recently disclosed his personal battle with depression after misguidedly obsessing over a Jack Kerouac lifestyle. In the essay, James Nolan, a writer for Vice UK, detailed the influence of the Kerouac novels like “On the Road” and “Five Easy Pieces” had on his life, which he processes as a desire to escape his mental illness.

Off the Record, But Online
x

next story
Off the Record, But Online
x