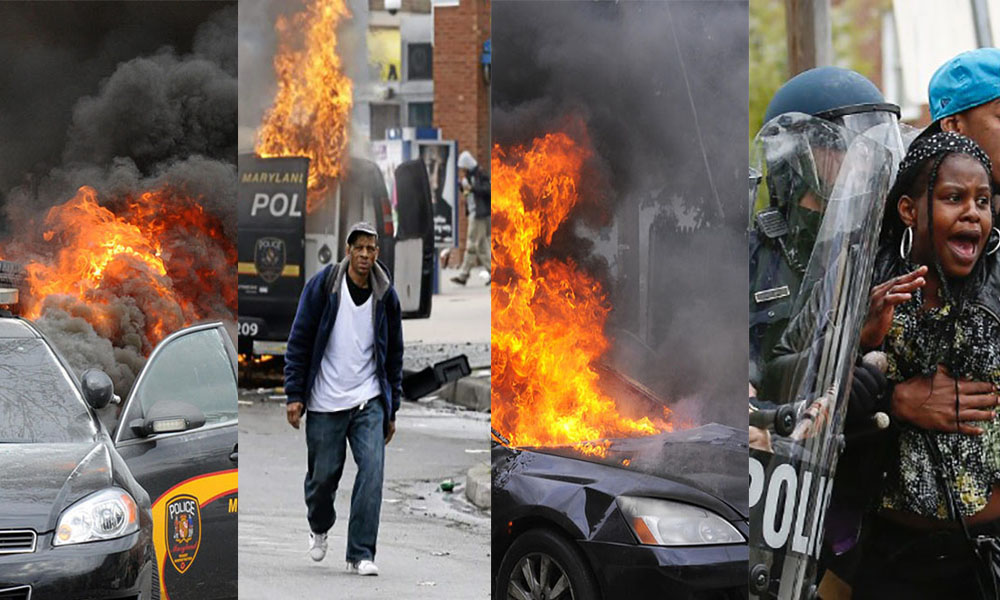 National and local journalists converged on Baltimore Monday to report on the violence that erupted after the funeral for Freddie Gray, a black Baltimore resident who died from injuries sustained while in police custody less than two weeks ago. Their coverage became part of the story as the nation and world focused on their images, stories, videos and commentary.

On Tuesday, President Obama was among those who questioned the intense media focus on destruction of property instead of the peaceful protests and other events that led up to the violence. Journalists also faced physical violence, with quite a few sustaining injuries, Poynter reported. 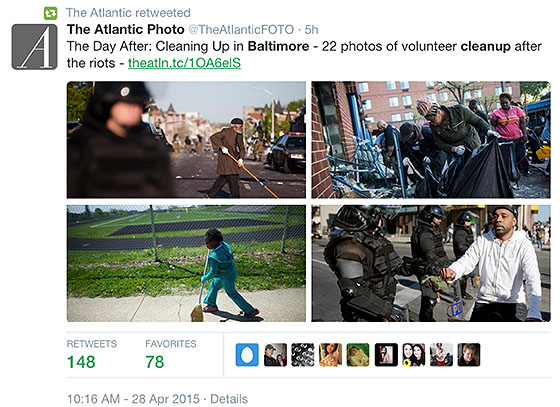 American Journalism Review explored how the news media covered the events in Baltimore in recent days, looking through a wide range of websites, social platforms, live video streams, photo-sharing sites and more. Here are some highlights: 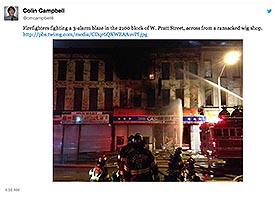 The Baltimore Sun, though, was the undisputed leader of local reporting, with live updates on its website and an active Twitter stream from reporters covering some of the more violent outbreaks taking place just blocks from its downtown newsroom.

The Sun removed paywall restrictions on its site for all information dealing with the riots, making its online coverage free for anyone to read. Its staff maintained a live blog around the clock that curated tweets, news, social media posts and images from staffers, politicians, government officials, pundits and citizens.

We have made our coverage of the Baltimore riots free and open on http://t.co/bNR6bmZLyS. (no registration/digital subscription required).

Baltimore’s City Paper photo editor J.M. Giordano was among the first journalists injured by police, along with Reuters photojournalism Sait Serkan Gurbuz, when protests first turned heated Saturday. Giordano took photo after photo over the weekend, and City Paper journalists published their signature verging-on-literary coverage – “The Battle of Sandtown-Winchester” and “The Fire This Time.”

The Daily Record took time from its financial and legal coverage with Twitter roundups of community clean-up and a photo gallery of the riots. The Baltimore Business Journal covered local business closings and preparation for protests, toured a looted pharmacy and asked whether the perception of violence will impact visits to downtown.

The pressure of national news organizations trying to report on local events showed in widespread criticism of CNN’s coverage. Specifically Don Lemon, a CNN anchor, was widely derided on Twitter. Wrote Slate: “When cities spasm with violence for complicated reasons, that’s the only question CNN wants to ask.” 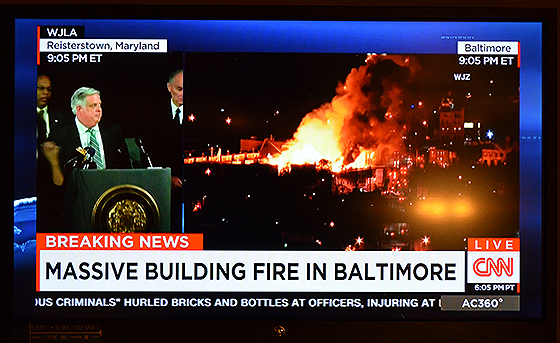 Around the country, while Vice News live-streamed coverage from the ground throughout the night, large news outlets embraced the coverage in varying degrees. Both large and small local outlets relied on wire coverage from the Associated Press and the New York Times, or reporting from Gannett and Tribune Company papers on the front lines. 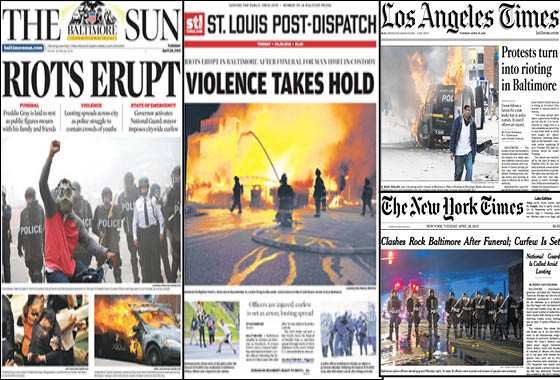 Tabloids such as the Chicago Sun-Times and the New York Daily News favored fiery images of angry protesters attacking police vehicles, looting and burning buildings, while larger broadsheet papers including the New York Times and Seattle Times printed images of police in riot gear and tense moments between law enforcement and demonstrators.

One photo in particular, an image from the AP depicting a man walking in front of a burning police van, proved particularly popular among the Newseum’s collection of daily front pages, from small West coast outlets to the Wall Street Journal and Los Angeles Times.

Newspapers within cities also differed in their coverage and presentation. In Miami, el Nuevo Herald featured the story at the top of the page with the AP photo printed large. However, the Miami Herald, its sister outlet, positioned the story lower on the page with a small photo of protesters jumping atop a police cruiser.

By Tuesday morning, several news organizations published run-downs and curations of the previous nights’ events, using photos, social media and multimedia to give readers an idea of the extent and impact of the riots.

BuzzFeed published “28 Moments That Show Another Side of the Baltimore Riots,” featuring photos and social media posts of camera-friendly fires and smashed police cars.  In sharp contrast to the more violent images, the gallery featured several photos of the cleanup, peaceful protesters, families and children.

Following the riots, the Washington Post published a series of stories providing context to the violence, including an explainer,  columnist Petula Dvorak’s first-person account of the scene and participants, and a story on the viral video of the “mom of the year” berating her son for throwing rocks at police.

Washington Post reporter Michael Fletcher, sharing his perspective as a 30-year Baltimore resident, offered more context on the city of Baltimore and the social conflict issues that have been building for years.

Outside the U.S., the Economist focused on the anarchy and chaos surrounding the riots, particularly the looting and destruction of property.  In the U.K. the BBC noted that a local amateur photographer, Devin Allen, was getting more attention than national publications for his photos covering Baltimore via Instagram and Twitter.

The Guardian’s Paul Lewis covered the riots on foot Monday night using the live-streaming app Periscope from different locations. He captured aspects of the action while interviewing people about the night filled with riots.

News organizations also posted frequently via the mobile photo-sharing app Instagram through the night. Time, CNN iReport and Mashable provided a range of images for viewers who observed activities online or on their phones instead of on TV.

Amidst the live-streams and b-roll of rioters throwing rocks and setting fires, several videos of a lighter nature went viral on social media. One popular video showed a Baltimore mother hitting her son and forcing him off the street after she learned he was involved in some of the early rioting:

Vietnam War veteran Robert Valentine stood in the middle of a Baltimore street Monday night and encouraged young people to “get their butts home.”

Several news organizations delved into telling the story via maps. Notably, the

Twitter hosted a ton of live images and videos from the scene as well as commentary from afar, tied to such hashtags as #baltimoreriots, #baltimoreuprising, #baltimore, #freddiegray and many more.

Here are a few of the more gripping tweets:

The guys who pulled me aside are self-identifying as Crips and say they don’t approve of whats happening. “This is our community”

Just one of many shots from today, Pennsylvania and North avenues, #Baltimore pic.twitter.com/n6JxgiQVDF

Forgive the Wire reference but: Novak’s grocery store, where Omar is killed, burned in this east side fire pic.twitter.com/ZBUIlx5jX0

Heroes of #BaltimoreRiots: Boy gives water to cops and man throws himself in front of rioters http://t.co/7D4tsLkc8I pic.twitter.com/1ktMcpnTzz 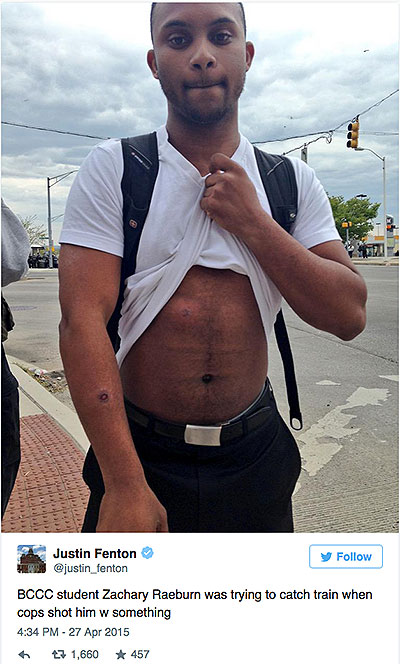 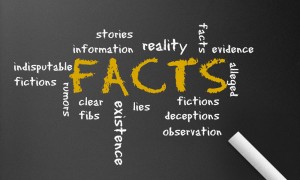 Getting it Right: Fact-Checking in the Digital Age
The American Press Institute is working to improve best practices in news fact-checking.
Aaron Kasinitz
Newspapers Hunt for New Readers on Instagram
Will Automated Copy Editors Replace Human Ones?
Confessions of a Clickbait Victim
more in Law & Ethics