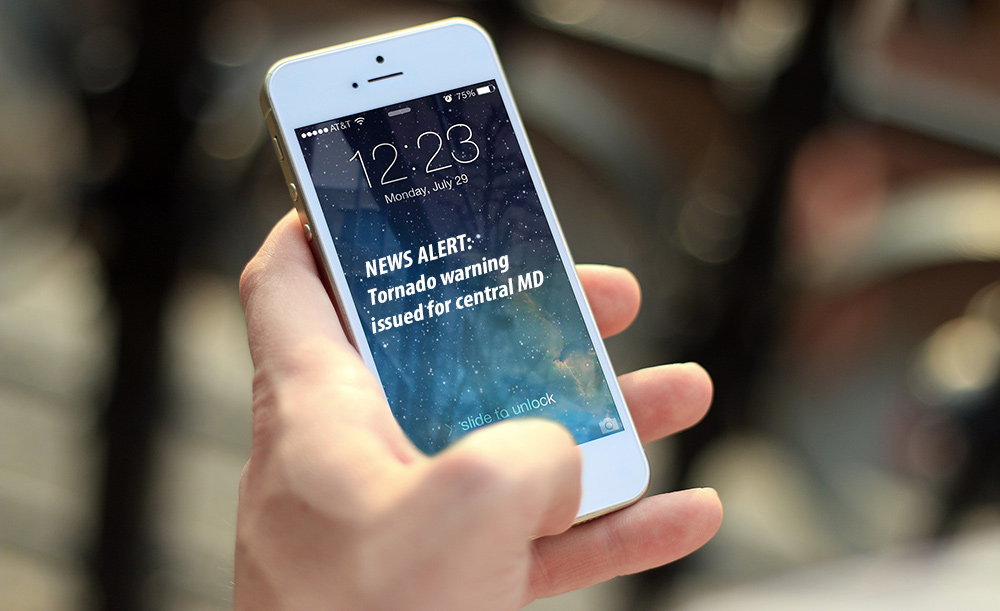 Phones and tablets buzzed at 8:15 a.m. all across Baltimore last Tuesday, the morning after Mayor Stephanie Rawlings-Blake proclaimed “this darkest day.”

“On the day after rioting, as Baltimore begins cleaning up, here’s what we know,” said a news alert zapped to users of The Baltimore Sun’s mobile news app.

For the newspaper, the simple text message got immediate results — some 29 percent of people who use the Sun’s app clicked through the link it contained, taking them to a story sumarizing the case of Freddie Grey, a black man who died a week after police arrested him in Baltimore, according to Sun data. That response rate was nearly three times the usual response rate of 11 percent on news alerts, said Steve Earley, the company’s community coordinator.

“Here in Baltimore with the Freddie Grey case we’ve been doing a lot more with push notifications,” Earley said. “It’s like our same approach on social media. … We’re not going to be shy.”

The Sun’s experience last week set a record for its reader-response rate and reflects a growing industry-wide focus on mobile interactions, especially news alerts or “push notifications.” News outlets increasingly are ramping up efforts to push news stories to readers where those readers are hanging out – on their smart phones.

“For the past several years, consumers have gotten more news from mobile sources,” Horowitz said. “It’s a growing trend in our industry. So we want people to use our app and be able to get their news from us on their phone, including push notifications. ”

Since Apple began promoting the iPhone in 2007, smartphones have steadily gained popularity in the U.S. At the same time, the media industry has experienced a major transition as readers ditched print products in favor of digital and mobile devices that offer easier and more immediate access to information.

Many news sites already draw most of their readers from mobile devices: A report released by the Pew Research Center last week found 39 of the top 50 news websites “have more traffic to their sites and associated applications coming from mobile devices than from desktop computers.”

Horowitz said the rise of mobile readership and advancements in technology, notably the recently released Apple Watch, have launched alerts to the forefront of many news organization’s thoughts. And while the practice becomes a key part of breaking news coverage, editors continue to grapple with the most appropriate ways to use this relatively young tool for distributing news.

“It’s news that comes right to your pocket,” Horowitz said. “Using these alerts is a very powerful responsibility.”

One issue many editors struggle with is deciding how often to send push notifications – how much is too much versus too little?

“The challenge is, of course, trying to balance the desire to get your alert out and inform readers with the need to be sensitive to the readers who might not want to be bothered,” Horowitz said.

American Journalism Review decided to find out by signing up for and analyzing news alerts sent by six American news outlets. AJR ran the test the week prior to Freddie Gray’s funeral, from April 19 to 26, looking at three national news outlets – two with a local or regional focus, and one covering sports. We accepted the default settings for each app except a sports one that  allowed regional preferences, which we set to focus on Washington.

AJR found the national outlets  tended to send more alerts than the regional ones. The two organizations that sent the most notifications were CNN with 26 and Fox News with 24. Bleacher Report Teamstream was next, sending 21 with the app’s settings fixed to receive notices about all four major Washington sports teams.

The Washington Post, a national brand with a strong local focus, sent 16 alerts, and The Baltimore Sun followed at 15. Perhaps most surprisingly, the New York Times’s news app sent 15 alerts, fewer than the other national services. 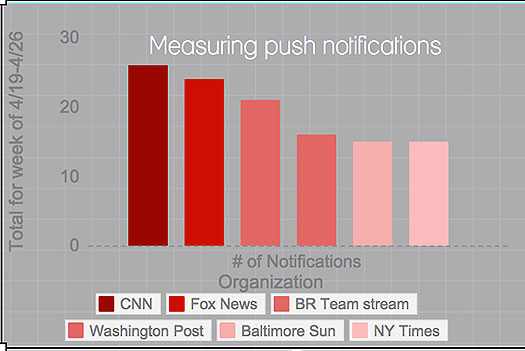 AJR’s test found CNN and Fox News sent the most alerts during the week-long test, at 26 and 24, respectively.

A New York Times spokesperson said the company would not comment on the test, and emails to The Washington Post and Fox News drew no replies.

Bleacher Report general manager Dorth Raphaely said his company was the first sports publisher to send alerts through its TeamStream app in 2011. He stressed the same issue as Horowitz – how to strike the right balance.

“We draw that editorial line, and ask, ‘Does someone need to be interrupted to get this information?’” Raphaely said. “I don’t know if we get it right all the time, but we certainly spend a lot of time asking ourselves that question.”

All six publications tested sent alerts with similar phrasing. Most used a factual tone, although The Baltimore Sun and Washington Post wrote several that teased readers in a fashion similar to the notice The Sun sent about the Freddie Grey cleanup.

Earley said the Sun is more likely to use language that promotes a story when linking to enterprise reporting or investigative stories, as opposed to using wording that simply provides a quick tidbit of news. “It’s like you’re encouraging the reader to click through and see,” he said.

Few alerts from April 19-26 included humor or an overly conversational tone. The verbiage was straightforward, like a notification from the Washington Post that read, “Prisoner in police van said Freddie Gray was ‘banging against the walls’ during ride.”

“Think about what you’re used to getting on your phone — texts and emails from friends,” Kramer said. “If alerts were voiced more like that, more conversational, maybe they’d have more of an impact.”

Earley is especially excited about the ability of users to save a link from a push notification on an Apple Watch and read it later on a tablet or smartphone. “That’s what the user wants, right?” he said, “to be able to know things immediately and then read them comfortably.”

CNN is developing its push notifications to allo users to watch live video, and Raphaely said he believes advancements in technology will help give users more choices as alert formats they prefer.

“There’s no doubt that push notifications are important now,” Poynter’s Kramer said. “Technology will make them more and more relevant in journalism.”

While journalist face challenges in mastering this practice — from deciding on frequency to understanding techniques — they seem to share a common goal.

“We see it as a service to our readers,” Horowitz said. “It’s just another avenue to inform, and one that’s growing.”

next story
Inside Digiday with Brian Braiker, Executive Editor
x

6 Strategies for Choosing Your Next Tech Skill
For journalists trying to learn new technology, it pays to have a strategy for deciding which tools to learn.
Aysha Khan
Publishers Test Messaging Apps for News
Personalizing News, Bringing Readers into the Story
Incubate: Time-Delayed ‘Messages with Meaning’