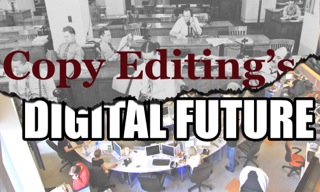 Abraham Hyatt saw the writing on the wall.

More than a year into his three-year managing editor stint at ReadWrite, a popular technology news site, Hyatt watched traffic plummet from roughly 5 million pageviews a month to less than 3 million.

Hyatt said part of the reason was the site’s decision to hire two copy editors, a move he said slowed story production and was driven by an “old-school journalism mindset” that the audience wanted “super clean copy.”

After watching traffic nosedive, he laid off the copy editors and adopted a “much more loose” editorial process to get stories live faster, including eliminating up-front story pitches and front-end editing.

Hyatt’s experience, recounted in a post on his blog in February, reflects larger questions about the role of copy editing in the Internet era. As red pens and page reads fold to search engine optimization and tweets, will digital media outlets make a place for copy editing? If so, where and how will it be incorporated into the online work flow?

Interviews with journalists at both legacy and Internet news outlets suggest that copy desks are slowly carving a niche into the digital media landscape, even if it’s a smaller one than in the print era. And copy editors increasingly are doing post-publication editing, a trend taking root on the Internet where some news outlets like to publish first and revise later.

That’s a total of 12 copy editors at five digital news companies, a fairly small number compared to newspapers. While many daily papers have downsized their copy desks, they still employ more editors than digital news sites typically do. The Baltimore Sun, for example, has about eight employees with copy editing responsibilities, and the Chicago-based Daily Herald employs about 20, representatives told AJR.

“A Natural Fit” for Digital Journalism

Teresa Schmedding, president of the American Copy Editors Society and a deputy managing editor at the Daily Herald in Chicago, said she considers copy editors “a natural fit” for digital journalism and social media.

“One of the things that we as professional journalists should have over a 12-year-old blogging in his basement is quality of content and credibility,” she said, “and that’s what copy editors bring to the table.”

Schmedding said she sees a “small number” of online-only copy editors involved with ACES and hopes their ranks will increase. ”I don’t think it’s quite there yet, but I do think it’s getting there.”

Gawker writer Hamilton Nolan said the blog doesn’t employ copy editors because of the potential drag the additional edits could cause on the site’s content flow. “Occasional copy errors are considered a cost of doing business,” he said.

But that does not appear to be the norm.

At BuzzFeed, FiveThirtyEight and Slate, all stories undergo the traditional process of at least two reads — one from an assigning editor involved with content and another by a copy editor. (AJR, which is an all-digital news outlet, also provides two reads on every story that it publishes.)

Not all editing occurs before publication, however, even though most publications contacted by AJR seem to do the bulk of their editing before stories go live. Some outlets publish first and then continue editing, a process known as “back-editing.”

“You can edit in layers, and I think that’s perfectly reasonable to do,” Schmedding said. “But to just toss it up without ever looking at anything can get you in a lot of trouble.”

But BuzzFeed and Slate do not have sufficient staffing to edit their daily rushes of content, and as a result leave lower-priority content without copy edits in advance, their representatives said.

Likewise, BuzzFeed “simply can’t get to every post before it’s published,” said Emmy Favilla, BuzzFeed’s copy chief and co-publisher of the site’s recently published style guide. So editors prioritize stories to edit based on traffic and whether the content was originally reported. Content that shows up in the site’s “Big Stories” column is likely edited, she said.

“We try to get to as many posts before they’re published as we feasibly can,” Favilla said. “Unfortunately, it’s not possible for every single post on the site to be copy-edited, given that there are three copy editors and sometimes dozens of posts going up every hour.”

By contrast, the newspaper editors interviewed said they edit everything before publication, although they might do less advance editing for breaking news.

“If it’s important and it’s a major breaking story, then at least give it a spell check and a quick libel check and then pick it up,” Schmedding said. “And then go back and spend more time editing it and reposting it.”

Lost in the digital transition, at least so far, is the newspaper “slot editor,” someone who parcels out editing assignments to copy editors and evaluates their work, serving as the final read on many stories. While some newspapers still have this position, the online outlets interviewed by AJR said their copy editors serve as the last line of defense in editing content.

As the news industry debates the future of copy editing, some people wonder whether online audiences care as much as print audiences about issues of grammar, punctuation and precise phrasing.

Hyatt, who is now an editor for Oakland Police Beat, an investigative startup he helped found, said the answer changes from one media outlet to the next, but that some sites may be better off without copy editors.

“There are places online where it’s just not a priority for readers: They don’t care,” he said. “They come to get information quickly.”

“At the end of the day, that’s all we’ve got is the trust that our readers have given us, and that’s hard to get back once you break it,” Schmedding said. “And that’s worth investing a little bit of time and resources to maintain.”

* This story has been updated to correct the names and job titles of Emmy Favilla and Hamilton Nolan.

The Future of Comment Sections: Moderated and Annotated?
x
>