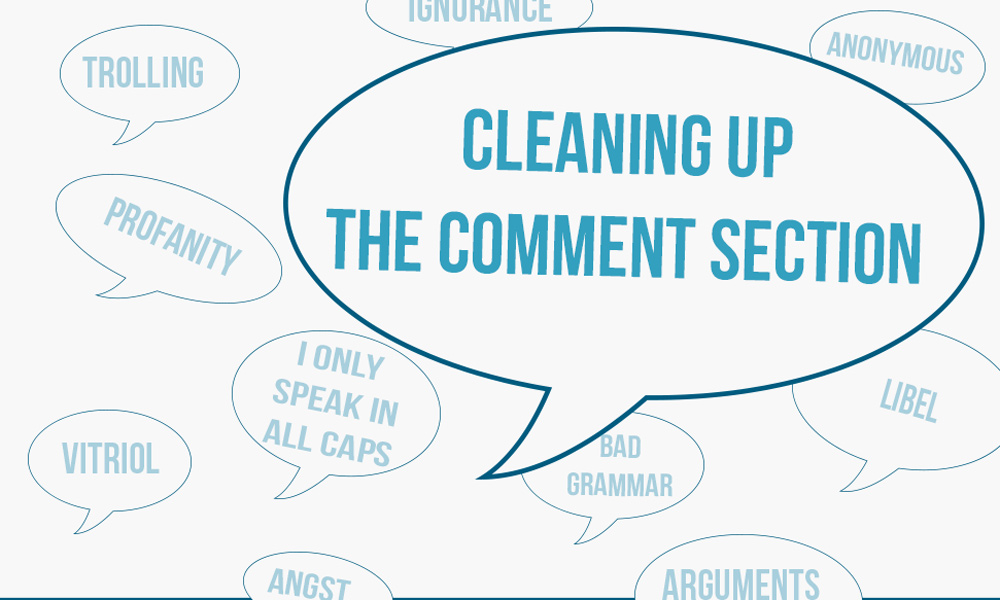 The virtual grab bag of human emotion that populates space at the bottom of content across the Internet — in many cases, unmoderated and anonymous — has become a relic of the past for some news organizations.

Various publications fed up with the vulgar and aggressive language spilling across their sites are devising new ways to improve the conversations under the content they post. Some have built more focused areas for users to post opinions, such as offering “annotations” for readers, as opposed to free-wheeling, open-ended, end-of-article debates. Others, such as USA TODAY’s sports news site For The Win, have shut down the comments section altogether, instead pursuing a strategy that encourages sharing on social media.

“The commenting on our site was mostly people stopping by and getting worked up about something,” said Jamie Mottram, content director for the USA TODAY Sports Media Group. “And leaving a comment was not part of the conversation – it was just them shouting at a wall.”

Still, there remains a passionate group of editors and publishers who believe in the power of on-site reader engagement. AJR spoke with Quartz, BuzzFeed, The Huffington Post and The Washington Post about the value of comments, and the essentials for maintaining a worthwhile comment section.

There is some evidence that sites are no longer viewing the comments section as a requirement. Some editors said they instead are taking more time to create better options for users to engage with news content.

Quartz, the Atlantic Media website covering business and the global economy, launched in 2012 without any comment system at all.

It had a specific plan for annotations instead of traditional comments, but “needed time to build it,” according to senior editor Zach Seward. “And we thought it wasn’t worth just doing comments for comments’ sake, or just slapping them on at the bottom of the story.”

In August, Quartz developed its annotation system, giving readers the ability to comment on specific aspects of a story in the margins.

As Seward explained, “Instead of letting people comment on an entire article at the bottom of a story, we allow our readers to leave a comment on the level of an individual paragraph.”

From the Archives: “Why News Sites Shouldn’t Allow Anonymous Comments”

It’s still unclear whether this approach will catch on with users. At this point, many Quartz stories have no annotations at all. Even many of those with annotations have a small number.

Seward said “the raw number is essentially irrelevant…I think we’re all familiar with coming to an article that has a thousand comments on it, and not really knowing where to start. Obviously you’re never going to go through that.”

Vox, a general interest news site that launched in April, has taken a similar wait-and-see approach to comments. The the site doesn’t maintain a comment section because editors are waiting to implement a system that will work specifically for their users.

“We’re still figuring out what approach to take,” executive editor Melissa Bell wrote in a recent post. Bell was unavailable to comment on Vox’s strategy going forward, but she wrote that the site will likely need a full-time staff person – or more – to build a true community.

At BuzzFeed, where there is a “strict policy against any kind of hate speech or personal attacks,” one editor moderates the comments section, said Cates Holderness, the site’s community editor.

Quartz uses a “light level of moderation,” according to Seward. When readers leave an annotation, an editor has the power to remove it if it’s off-topic or spam.

The site has recently made it a priority “to emphasize civility, allowing different and differing voices to be heard in a respectful way,” McDonald said. The Huffington Post also stopped allowing anonymous commenters in 2013; it requires users to sign in with a verified Facebook account.

Some news organizations are making an effort to go beyond simply scrubbing out bad comments — such as the libelous and the profane  — and are trying to amplify the good ones.

On The New York Times, 478 readers are graced with green checkmarks as “verified commenters,” and their posts go up on the site without any moderation from Times editors.

These individuals are “selected algorithmically based on the breadth and quality of the comments they have submitted over time,” Sasha Koren, the paper’s deputy editor of interactive news, said in a Public Editor journal post.

The Times also includes “NYT Picks” and “Readers’ Picks” in its comment section, choosing to feature certain comments it deems particularly valuable, or ones readers “recommend.”

At The Washington Post, community manager Julia Carpenter said there’s a new initiative in the works to amplify and highlight comments from people quoted in a story or “directly mentioned in a story’s event.”

“This kind of user-generated content will add another layer of context upon a story and deepen readers’ understanding of an event or situation,” Carpenter said.

What is the future of commenting?

There is no widespread agreement among news organizations on the correct way to handle a comments section, but it’s clear some editors are putting more thought into designing these spaces to correspond with a website’s mission.

Annotations, for example, appear to be gaining momentum as an online feature – they have been well-received at Gawker Media (where you can annotate images), Medium (where they’re called “notes”), and Rap Genius, and were recently implemented into the comment platform Livefyre.

“We’ll see more of this form of commenting in the future,” said Talia Stroud of the Engaging News Project, a research project at the University of Texas (which conducted a News Engagement Workshop in April). “I think annotation systems may encourage more relevant comments that are tied to the meat of the article.”

“With the popularity of texting and social media on mobile … it’s clear that people aren’t averse to typing on mobile and engaging with others,” she said. “I think it’s just a matter of time before we figure out how to do comments on mobile.”