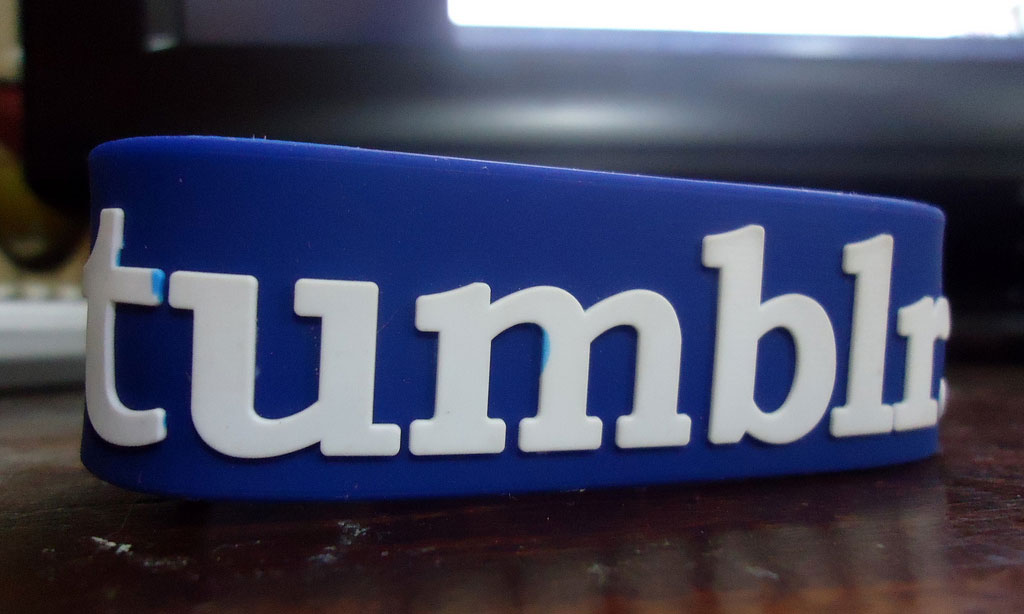 On a recent day, The Washington Post Twitter account is a drumbeat of news about a Supreme Court pregnancy discrimination case, racial profiling in America and unrest in Ferguson, Mo.

Its Tumblr account tells stories through a quirkier lens. Take for instance, its photo montage of brains, nestled into decrepit-looking jars and adorned with yellowing labels. The post links to a new book called “Malformed: Brains from the Texas State Mental Hospital.” Scroll down lower, and the Post’s Tumblr account contains an animated GIF of an exploding turkey amid a warning to be careful with deep fat fryers.

The Washington Post is one of many news organizations using Tumblr, a fast-growing blogging platform where users post photos, animated GIFs, videos and quotes, and “reblog” content from other users. Social media editors said Tumblr has helped their news organizations engage with readers, connect with a younger audience and document experiments in journalism. Not all social media editors are enthusiastic about Tumblr, though. Some questioned the value of pouring staff resources into populating a platform that can’t compete with the referral power of larger social networks like Facebook and Twitter.

Tumblr is a 7-year-old social blogging platform that appears to be catching a second wind since it was purchased by Yahoo last year for $1.1 billion. Entrepreneur David Karp launched Tumblr in 2007 and it was soon overshadowed by Twitter, which launched a year earlier. But in the past six months, the number of people actively using Tumblr grew by 120 percent, overtaking Pinterest, Instagram and even Facebook in terms of growth, according to Market research firm Global Web Index. Overall, Facebook remains dominant among social networks, commanding the most active monthly users overall — at 1.35 billion, reported Tech Crunch.

“I need to get a job at WaPo because they always seem to have the best treats,” one user wrote on the Post’s Tumblr recently, in response to a post about Election Night-themed cupcakes. 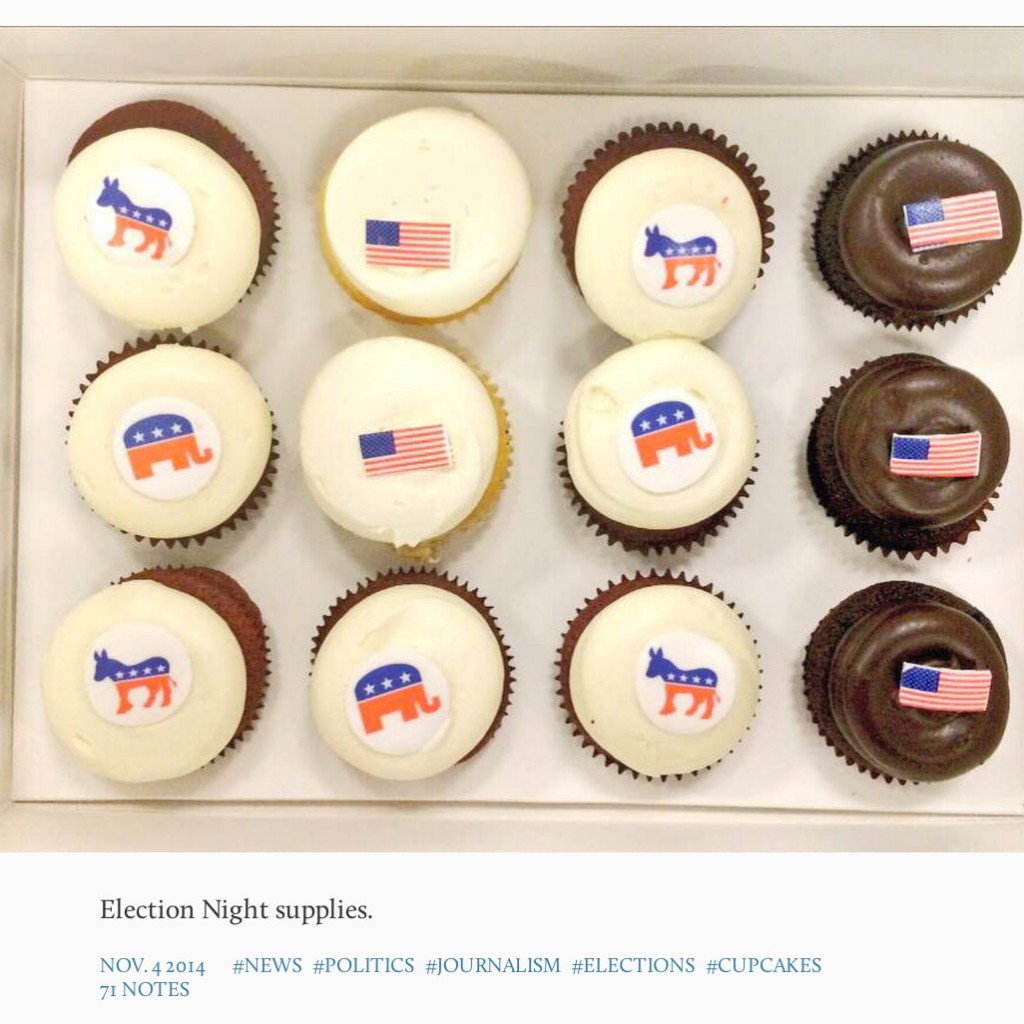 Carpenter said the playfulness of her posts doesn’t take away from the important work the Post is doing.

“I don’t like the word ‘relaxed,’ because to me that signifies something that we take a relaxed or laid back view of the journalism we’re creating, which is very serious and important to us,” she said.

Similar to a newsroom that covers multiple beats, Carpenter said the Tumblr account may include a joke with readers in one post and an update on Ebola or ISIS in the next.

“I feel like the way I run the Tumblr, it definitely follows our standards of ethics, and our rules for good journalism are intractable,” Carpenter said. “They translate the same way. The voice on Tumblr is different the way our voice on Twitter is different and our voice on Instagram is different… The policies we adhere to when we run our social media platforms are still in place.”

Carpenter also uses Tumblr as a place to delve deeply into topics.

Tumblr doesn’t have character limits like Twitter, which opens up opportunities to explore issues and interact with readers in greater depth. In one instance, Carpenter posted a musing from political journalist Chris Cillizza about how his journalism style has evolved: (“The expectation of absolute certainty is falling away, being replaced by a strong desire for transparency. Not having the answer or even having the wrong answer is no longer a mortal sin in the eyes of readers — as long as you as the journalist are transparent about those facts.”)

NPR loves Tumblr. It manages dozens of Tumblrs, including one for interns and one for a special NPR project: “Planet Money Makes a T-Shirt,” which follows NPR reporters around the world as they document the journey of the creation of one T-shirt. (There is one story told in four GIFs: The cotton picked in the Mississippi Delta, the yarn spun in factories in Bangladesh and Colombia, the yarn then knitted into fabric, and finally, the T-shirts that were printed in Brooklyn.)

The NPR Intern Tumblr includes posts on music interns listen to, assignments they complete and advice for future interns (“Be kind,” said Sara Peralta, a 2014 marketing intern, on a Tumblr Q & A. “Be gentle when others make mistakes and be generous when others shine. Be determined to be gracious.”) 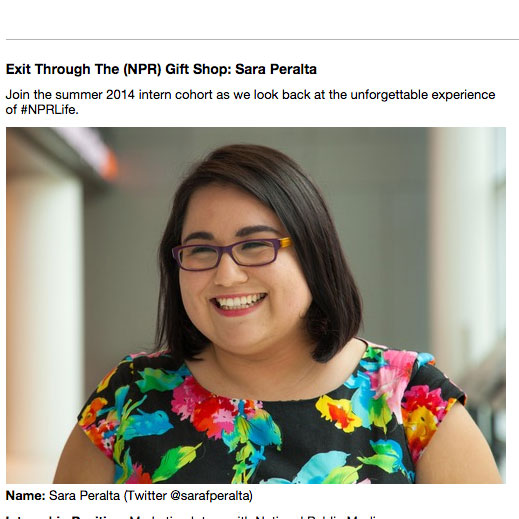 NPR posts photos and Q & A’s with its interns on its NPR Interns Tumblr. Screenshot of a feature on Sara Peralta, a 2014 NPR marketing intern.

Tumblr works for NPR because it’s a creative platform that is simple to use, said Melody Kramer, an editor and digital strategist for NPR, and one of the six main NPR Tumblr curators.

“It’s very, very easy for everyone in our newsroom to get the hang of it,” she said.

Some other benefits: It’s easy to play with the code to create a customized page design, Kramer said. Tumblr also allows users to search through the blog’s post archive. Pick a year and a month and users can browse everything that has been posted in a particular period of time. Tumblr also allows users to post entire segments of stories or many pictures in a row. Plus, it has a “nice community built in,” she said.

Some journalists use Tumblr to illustrate a new project or initiative.

BBC uses it for journalists at BBC Pop Up, an experimental journalism project the company started in September that sets up impromptu newsrooms in cities across America to capture slices of life in places that normally don’t receive national news coverage

Recently, journalists Matthew Danzico and Benjamin Zand used Tumblr to document a community meeting in Baton Rouge, La., where they asked residents for story ideas to help them guide their coverage. 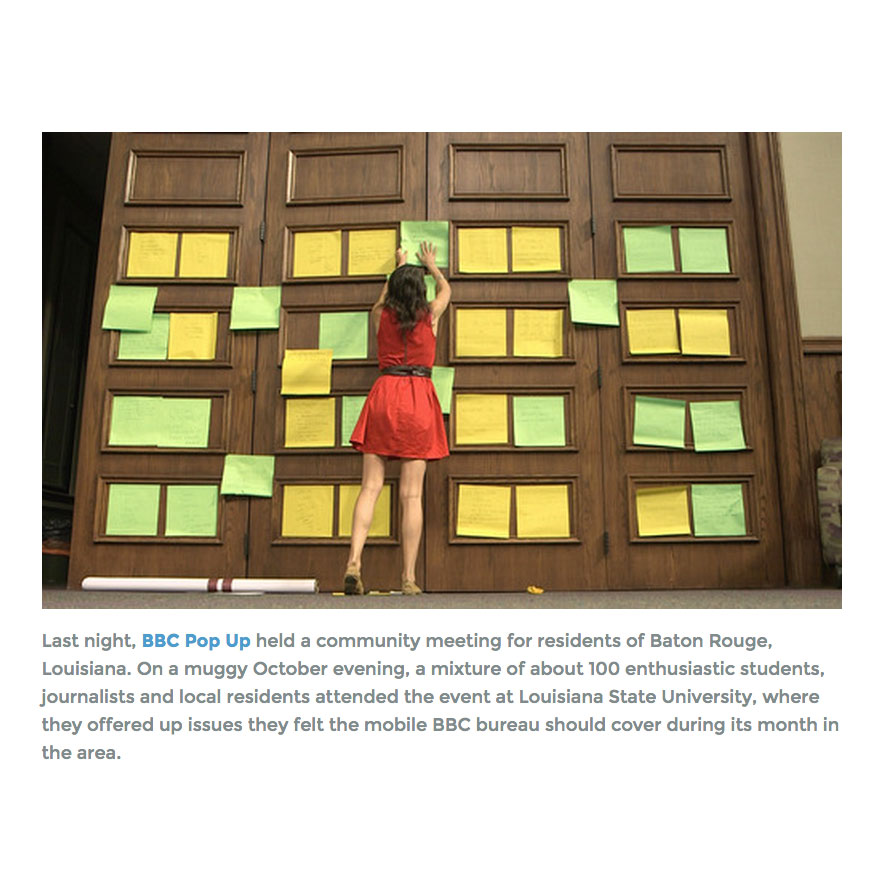 A screenshot from the BBC Pop Up Tumblr, which documents the efforts of journalists to find story ideas is communities in American that don’t typically get a lot of media coverage.

For example, when Boulder, Colo., had its first snowfall of the season, Danzico shot and edited a short video and posted it to Tumblr, a video that would never go on the BBC website or go on air.

“BBC content, and the way the BBC writes things, is more formal content,” Zand said. “The aim was to kind of have a blog away from the BBC site.  … It allows us to detail why we do things, talk about each individual story we’re doing and why we chose it.”

“It’s a new space for the sharing of ideas in an open and free way,” he said. “We need a showroom, and we need a laboratory, and the BBC website can be both, but we want to try new things too.”

Newsweek launched its Tumblr account in November 2008. Kate Gardiner, the former director of audience engagement at Newsweek, said earlier this fall that her social media team didn’t have the time to dedicate to a platform that wasn’t a primary traffic driver.

For Gardiner and her team, creating original content for the platform means “you’re cutting all the good parts out of what’s going up on the website to put it on Tumblr.”

“My guys don’t have enough time to focus on it,” she said.

Shaminder Dulai, Newsweek’s photo director, took over the Newsweek Tumblr in October and is bringing a visual focus to his social media approach. He posts only photographs with accompanying text from the related article. 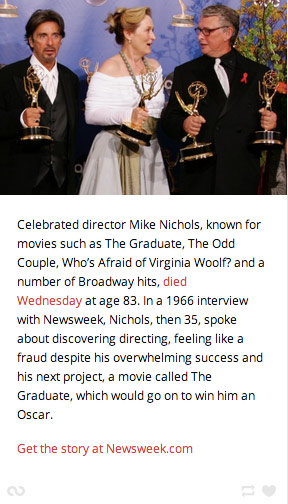 Screenshot from the Newsweek Tumblr.

“We’re finding that more people like to share the pictures,” Dulai said. “It’s visual, it’s quick, they can kind of scroll through it. If they like it, they hit the button, that’s it.”

Dulai’s posts range from the Hong Kong student protestors being carried away by police to focusing on protestor street art in Ferguson, Mo.

Dulai said he’s worked on balancing the quantity and quality of Tumblr posts.

“We had a strategy shift over the summertime… We were posting a lot,” he said. “It was almost to the point where it was like too much noise signal. So we found that by posting a little [less], it seemed like the posts were doing a lot better.”

Dulai is the only person posting to the Tumblr and he hopes that at some point, other section editors will contribute to the Tumblr and post stories from their beats. But until then, his primary goal for the Tumblr is to make it visually appealing to readers and drive them back to the website.

“It’s kind of like we’re teasing out stories,” he said. We’re giving people a taste of what’s available on the website. Hopefully it’s another avenue to bring a different audience to our website.”

Other News Experiments on Tumblr

Some other news organizations said Tumblr isn’t a part of their core social media strategy, but they consider it a valuable tool for engaging with younger users and other niche audiences.

“[The audience] is a little bit younger, and you have to take that into consideration,” said Nora Grenfell, Mashable’s social marketing manager. “It’s where people communicate primarily through GIFs, which I think is amazing. I think a lot of people think of Tumblr as being sort of silly and funny, but it’s also probably the most committed social justice community.”

Alex Rabinowitz, deputy programming social media editor of Mic.com, characterized his Tumblr audience this way: “[It’s] a young audience that really aligns with the Mic brand, and also an educated and affluent and somewhat liberal-skewing audience as well.”

“It’s not a core part of our social media strategy, but something we see as a worthwhile attempt at attracting new readers and packing our stories in a different way,” he said.

Newsrooms Grapple With How to Avoid Twitter Bloopers
x
>

Front Pages after the Ferguson ‘No Indictment’ Decision
x

next story
Front Pages after the Ferguson ‘No Indictment’ Decision
x