AMERICAN JOURNALISM REVIEW
alpha
Freelance War Photographers: On Their Own in Danger Zones 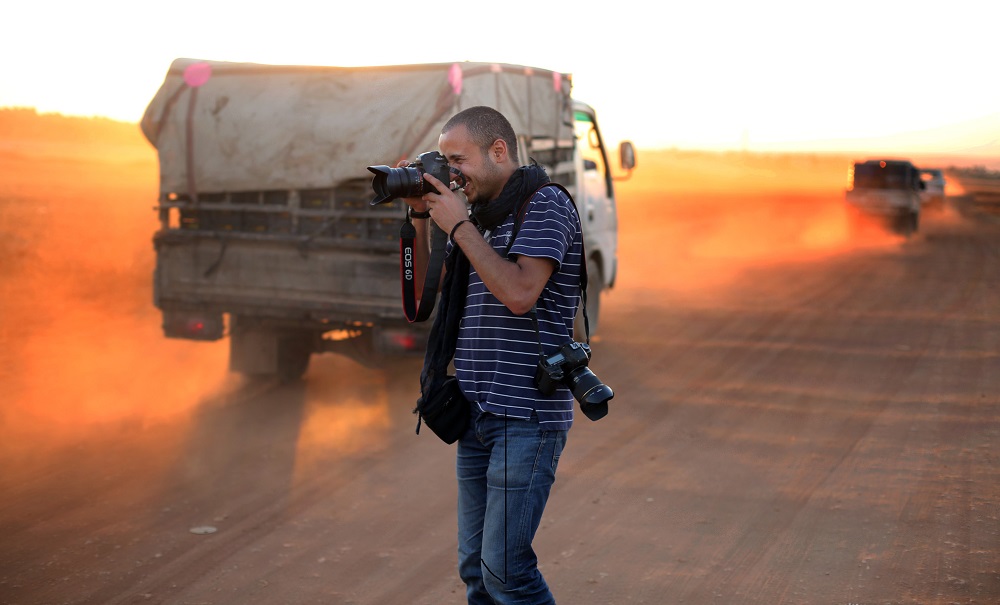 Photojournalist Ahmed Deeb was anxious to get inside the Syrian city of Kobani earlier this month. Few journalists had been able to report or take photos inside the besieged city on the border with Turkey since the Islamic State surrounded it in October. 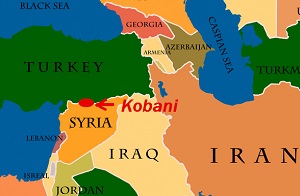 Kobani sits on the border of Syria and Turkey.

Deeb, a Palestinian from Gaza who has been photographing the war in Syria since 2012, said he thought he had the necessary permission to enter from Turkey. But then soldiers from the Syrian Kurdish forces protecting the town turned on him, beating him and taking his equipment. Uninjured, he was sent back to Turkey without his gear.

A misunderstanding, the Kurdish forces, known as YPG, later told him, apologizing. He made it back in a day later and got his camera equipment back.

As American news organizations have slashed their budgets for foreign news, freelance photographers have picked up the slack, assuming the growing dangers on their own — often for little pay (from $50 to several hundred dollars for a day rate) and without insurance. The dangers journalists face in countries like Syria have prompted news organizations to review their policies regarding the use of freelance work and triggered debates over who should bear responsibility for their safety.

“Freelance labor has become like migrant labor in the United States,” said Gregory Beals, an American journalist and humanitarian worker who has spent the past 10 years working in conflict zones.

The risks for Deeb and other freelancers in Syria are particularly high. At least 72 journalists have been killed in Syria since the conflict began in 2011, according to the Committee to Protect Journalists, which has ranked Syria the most dangerous country in the world to report. Nearly half of those killed were freelancers, journalists who were not working as staff members for any media organization at the time of their deaths. Two of the most publicized deaths were those of American freelance journalists James Foley and Steven Sotloff, whose beheadings were captured on video and distributed through social media in August and September. Video of the murder of a third American, Peter Kassig, a humanitarian worker who was captured by the Islamic State last year in Syria, was released on Sunday.

Deeb went to Kobani “on spec,” freelance lingo for going somewhere to take photos and then hoping that a wire service or new agency will buy them. He made a calculation that freelance photographers make all the time, weighing the risks against the desire to report a story and the potential to get paid, especially for exclusive photos or video footage.

The photos Deeb took inside Kobani, also known as Kobane, provided a rare peek inside a city that has become a strategic flashpoint for the battle against the Islamic State. With reluctant permission from the Turkish government, Kurdish soldiers from neighboring Iraq have joined forces with fighters inside Kobani to keep the town from falling to the Islamic State. U.S.-led coalition forces also have been pounding Islamic State targets near the city with air strikes in an attempt to keep the city out of the hands of a group that already has seized key territory in Iraq and Syria, part of its master plan to create an Islamic caliphate.

Deeb filed his images of the conflict in Kobani to three news agencies—Agence France-Presse, NurPhoto and Anadolu. They ran in publications around the world, including the Guardian in London and The Washington Post, which published a gallery of photos on Nov. 8. Both the Guardian and the Post used photos that Deeb filed to AFP and distributed through Seattle-based Getty Images Inc., a large stock photo agency that sells news images to media companies all over the world.

The photos from Kobani help explain the complicated relationship freelance photographers have with the news organizations that buy their work, one that has grown trickier as freelancers assume a larger role as key suppliers of foreign images used by major global news outlets. Overall, in U.S. newsrooms, staff photographers have been among those hit hardest by job cuts. The American Society of Newspaper Editors highlighted this in its annual newsroom census in 2013, noting that nearly half (43 percent) of the jobs cut from 2000 to 2012 were those belonging to photographers and other visual journalists. At the same time, the desire for images to tell stories has not diminished. 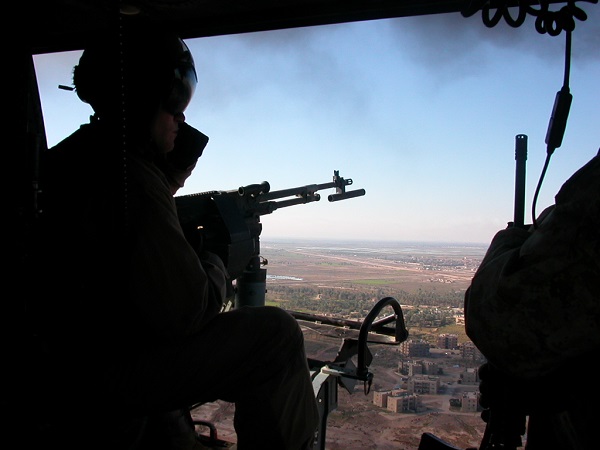 U.S. Marines fly over western Iraq in 2004. By Jackie Spinner.

Photo editors wanted what Deeb had. But Deeb had to take the risk on his own to get them because news organizations are under increasing pressure to distance themselves from photographers who go in on spec. AFP, for example, announced in September that it would no longer take freelance work from foreign freelance journalists. Many Western news organizations will not send their staff into Syria right now because of the dangers. But there are still photographers like Deeb who are willing to go –and those same publications will publish the photos if they come through the photo agencies.

In Deeb’s case, AFP pointed out that it did not send him into Kobani or even encourage him to go. His editors also noted that he is half-Syrian, not a foreign freelance journalist. That may seem like a small distinction except that it means AFP did not violate its own policy against using foreign freelancers, a prohibition AFP Global News Director Michele Leridon explained in a blog post in September.

“He offered pictures to AFP while in Kobane and we bought them as we do regularly with Syrian stringers,” said AFP Photo Editor in Chief Eric Baradat. “He contacted AFP while he was going in with YPG fighters, and we never asked him to go there.”

In a statement provided by Colleen McCabe, senior director for external communications for Getty Images, the photo agency said it takes full responsibility for photographers who shoot for its organization. Deeb, however, was not on assignment for Getty. “Getty Images maintains a responsible and thoughtful position when assessing the possibility of photographer movement in conflict zones,” according to the statement. “Decisions are based on the best and most updated information available and made with individual photographers and on a case-by-case basis.”

Deeb does not see himself as a daredevil, the reputation that many freelancers have. He was reporting from Syria because few others are, he said. He does not look like a foreigner and speaks Arabic. He also is not a novice to conflict, having grown up in Gaza, said Deeb, now based in Turkey.

“My decision to enter Syria after three years of the conflict was because I noticed that most of the media and journalism became not interested of what is going on in Syria,” he said. “They don’t send their journalists to cover this ongoing conflict. Foreign journalists are scared to enter Syria because of the kidnapping wave by the extremist fighters.” 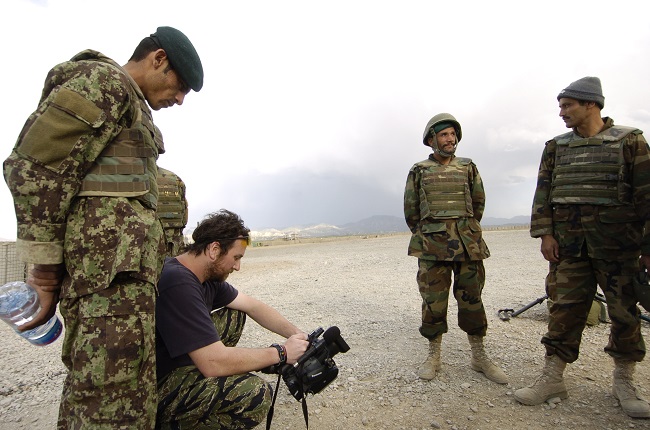 The registry, which launched in June 2013, had 495 members at the beginning of November. It bills itself as a “representative body for freelance journalists exposed to risk while gathering news.”

In a survey of freelancers who had registered, a third of them “thought that the editors that they did business with didn’t give a hoot about their safety,” Smith said. “I think the news industry has failed to show leadership to freelancers over the years. Should the relationship between news organizations and freelancer/local journalists be so exploitative? Is it rightly a normal commercial arrangement where the stronger partner can bully the smaller one, thinking only of its own monetary interests?”

The registry is pushing for better safety training for freelancers, many who could not otherwise afford it, as well as for insurance coverage, which is also expensive. 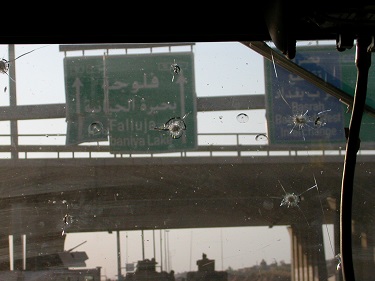 Bullet holes in a windshield outside Fallujah, Iraq, 2004. Photo by Jackie Spinner.

Another platform trying to help freelancers is the New York-based Storyhunter, a community marketplace that connects journalists with news organizations. Freelancers frequently complain that news outlets take so long to pay them for their work. Storyhunter acts as the mediator, handling all the sales and distribution. It vets the freelancers for the news companies, offers safety briefings and, most importantly, provides insurance coverage.

It does not allow freelance work from foreign journalists in Syria, said Alex Ragir, co-founder.

“There are some countries with calculated risks for freelance journalists entering a conflict zone,” he said, offering Iraq or Honduras as examples. “But in Syria, this is not the case. Because of the tragedies that have happened recently, the only Storyhunters that we are allowing to produce stories from Syria are locals who know clearly the risks they are taking.”

The platform generally does not allow footage to be uploaded on spec. “Most of the other services in the market ask freelancers to upload footage that may or may not be bought by publishers,” he said. “We very rarely work like that because we’ve been in the freelancer’s position and know how working on spec can become exploitative.”

“More photographers from the developing world are trying to make a living doing photojournalism,” he said. “The perspective they bring to international reporting is extremely valuable, but even Getty, compared to the normal practice of a generation ago, still seems to exploit this third world favor. It really is an interesting dilemma. You can still get people from the third world to do this kind of thing.”

Amelia Newcomb, international news editor for the Christian Science Monitor, said that throughout the distribution process, news organizations remain responsible. The Monitor has a strict policy against using inexperienced freelance correspondents in conflict zones. The policy was created after Jill Carroll, who had been freelancing for the Monitor, was kidnapped and held in Iraq for three months in 2006. 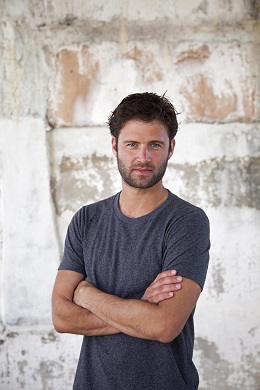 If it gets a photograph from a wire service, the Monitor has to do due diligence to find out how it was taken, she said. “We still bear responsibility,” Newcomb said.

American freelance photojournalist Sebastian Meyer, co-founder of Iraq’s Metrography photo agency, said the draw to conflict photojournalism is strong in spite of the risks, in part, because when photographers go in and out of conflict zones and survive, they start to feel invincible.

He said one of Metrography’s photographers recently documented Yazidis trapped on a mountain after being chased by the Islamic State. The photographer now wants to go to Syria, which Metrography is discouraging.

Surviving compounds the problem, he said.

“If you take a huge risk and you do survive, you can do very well,” he said.

After he finished photographing inside Kobani, the Turkish Army arrested Deeb on his way out. He spent a day in jail before he was able to convince them that he was a journalist and not a fighter. He is now looking for more news outlets that may want to buy his work, including a story on Kurdish female fighters that he documented while he was there. He crossed the border into Syria again this weekend, this time traveling to Aleppo. He went again on spec.

Jackie Spinner (jackiespinner@mac.com) is an assistant professor of journalism at Columbia College Chicago. She was a staff writer for The Washington Post for 14 years and covered the wars in Iraq and Afghanistan. She is the author of “Tell Them I Didn’t Cry: A Young Journalist’s Story of Joy, Loss, and Survival in Iraq.”

Front Pages after the Ferguson ‘No Indictment’ Decision
x
>