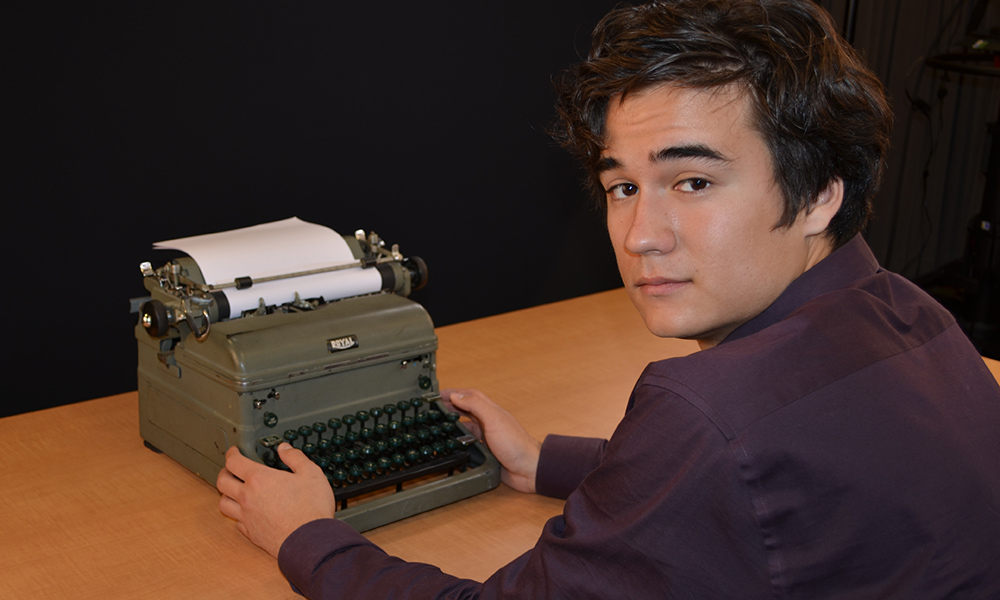 I can see why they invented computers.

For one week, I had to use a manual typewriter instead of Microsoft Word.

This meant all my assignments, essays and articles for the week had to be manually typed up. It also meant I had to lug a 40-pound typewriter everywhere I went.

With the recent popularity of typewriter apps, such as Hanx Writer, I wondered if there was some sort of backlash against our always-on connectivity, something I’ve observed, since, well, forever.

Richard Polt, a professor and chair of philosophy at Xavier University, said there is.

I’m 19. Before this experiment, I had never even seen a typewriter.

I wanted to get a taste of what old-time reporters had to go through. I wanted to see how it would influence my writing and my thinking.

Step 1: ‘Think’ Before You Write

Other writers and aficionados of the typewriter said the device could have a big influence on writing.

“It makes you think more,” said Peter Hartlaub, a pop culture critic for the San Francisco Chronicle and the man behind the @NewsTypewriter Twitter handle.  “It makes you more careful about your words, and it’s going to be really helpful for you as a writer.”

I thought about my writing style. I’ve been writing on a computer since I was kid. I enjoy the freedom of dumping a stream of consciousness onto the screen and revising it later.

Would I lose this freedom with a typewriter? Or would it make me more disciplined?

Peter Weil, an associate professor of anthropology at the University of Delaware and typewriter collector, thinks the quality of my writing will depend on me more than the machine.

“Whether or not you do a good job writing,” said Weil, “is really a matter of procedure, not a matter of technology.” Weil said a careful writer will do a thorough job, no matter if they are writing on a typewriter or computer.

I asked Hartlaub for advice on how to be a good writer — on a typewriter.

He told me to have an idea of what I was going to write before I sat down. He also offered this:

“Lift with your legs,” he said. Typewriters are heavy; he doesn’t want me to hurt my back.

With this in mind, I set out on my journey.

My first challenge was actually finding a typewriter.

I found out there was one in my journalism school’s student services office. I went down to check it out.

In the lonely back corner of the office sat a dusty IBM Selectric III.

“I’ve been here approximately five years and nobody has used it,” said a staff member. “I barely knew it was here.”

Struggling, I hauled the heavy and neglected brute up three stories (by elevator, thank goodness) and set it down with a large thud in my office.

My hands were gray with dust.

I plugged it in and tried it out. It went berserk, typing random letters as fast as it could without provocation. It sounded like a machine gun, only louder. It was broken beyond repair.

“That thing has got to go,” said a colleague.

Two more staff members brought in their personal typewriters for me to use. One was big, green and heavy, and the other was cute, pink and portable. I opted for the smaller, more convenient one.

Oh, also, the green one was filled with mystery hair.

The only problem with the pink typewriter was that the ribbon didn’t advance. Every three seconds I was opening up the machine, spinning the ribbon with my hands, often having to rethread it because it got tangled.

At this point, my quest for writing on a typewriter was making my writing worse.

Because there was no writing to be had. 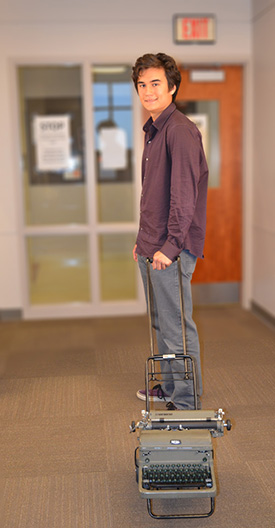 Writer Cory Blair hauled his 1940s-era typewriter around campus while he tried to make it “mobile.”

After one page of faint text and black fingers, I decided to use the hairy typewriter.

I wondered how old it really was.

I advanced the carriage all the way to the left and used my index finger to wipe the exposed area of dust, dirt and grime and spotted a faint indent with the serial number. I was able to look up more information on TypewriterDatatabase.com.

I decided that if I was going to do this experiment right, I was going to have to integrate this typewriter into my mobile, modern life. That meant I was committed to hauling it around to my different workspaces.

I needed a cart if I wanted to carry around this 40-pound beast.

After much searching, I eventually found a rinky-dink dolly that I could use for a week.

The typewriter barely fit the dolly and would often slip through the metal frame, crashing on the ground with a metallic thud.  The faster I tried to walk, the slower I would go. Oh, the bitter irony of it all.

I walked my typewriter like it was a crippled dog.

This was all so hard, getting the device to move, I didn’t even think about the words “Twitter” or “Facebook.”

I wondered what was it like for 1940s-era reporters who didn’t have mobile phones and tablets.

What was it like to have a thought you weren’t compelled to immediately share with the world?

So many feelings. Blair took notes on his experiment on his typewriter.

I took the typewriter home to my dorm, where I brought it to a lounge where I normally do homework. I had to write a 300-word news story for my journalism class. I sat down and started banging away on the keys.

Every single person there looked up from their laptops and cell phones and stared.

“Yes,” they replied, in unison.

“I’m sorry,” I muttered, before putting my head down and getting back to work.

Finally, even though I was annoying everyone in the room, I was in the zone.

The keys were loud, but each word was lobbed onto the page with a satisfying thud.

I felt strong. I felt empowered.

That is, until I screwed something up and had to start over from scratch.

It took me 13 copies and a couple of hours to bang out the perfect news story. It wasn’t too pretty, but I loved it, the same way a parent is obliged to love their ugly child.

Step 4: Try Not to Throw the Typewriter Out the Window

At one point, I decided to buy white out from my school’s common shop. I immediately spilled it on my black jeans. It stained.

At work, while typing up my stories, my ribbon began to run out of ink. I decided to flip the ribbon upside down to get more mileage out of it.

I popped open the hood and spent 15 minutes threading the ribbon onto its track. My fingers were stained with ink.

While threading, I was writing this very story in my head, calculating how I would talk about the struggle to find a working typewriter, the humiliation of hauling it around campus (did I mention I brought it on a bus?), and the feelings of rejection I felt after handing completed copies into my editor and having them almost immediately spiked.

When I started typing again, however, the words were even fainter than before.

I typed out a few curse words, and began the long process of flipping over the ribbon yet again. 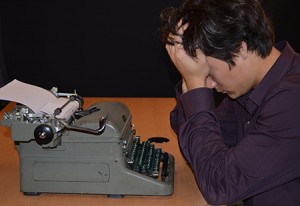 The novelty of the experiment was beginning to wear off. I began to get annoyed at the typewriter, blaming it for my problems, lack of free time and low esteem.

My perfectionism began to wear off as well. Fed up with typing multiple copies of everything, I blazed through my 1,200 word essay for a war narratives class in one take, using white out to correct my mistakes. The result was messy, but I didn’t care anymore.

The noise was also a problem. I began to long for the soft pattering of a computer keyboard, the type of noise that doesn’t shoot down my thoughts mid-flight, but creates a soft rhythm to propel them forward.

The clanging. The dinging. The pounding. The ripping.

It was driving me crazy.

Step 5: The Sweet, Sweet Freedom of Typing… on a Computer Again

The next workday, I began to type up this story on the typewriter.

I laid out my notes across my desk. I studied them to try to envision a structure.

How would I get the point across that I possibly learned nothing and it was all a pointless struggle?

I typed up a draft. My editor hated it. And then another. And another.

This went on for four different drafts before we both broke.

We decided to collectively say, “Screw it,” and type up the story on a computer.

And just like I that, I reverted to my old ways.

My thoughts flowed onto the screen quickly and I didn’t hate myself for mistakes. If I wrote a crappy paragraph, I deleted it. And then I wrote another one that was a little better than the one before.

No one glared at me for being loud. No one avoided me for carrying around a device, that, if we’re being honest here, smelled a little bit.

I was funnier. I was smarter. I was, all in all, a better writer.

As I sit here, finishing up this story, I am typing possibly the last page I will ever type on a typewriter. It’s a bittersweet experience.

Though I had fun, it was frustrating, my grades suffered and my productivity dropped.

If I learned anything, it’s this:

When your editor asks you to write everything on a typewriter for a week, say no. Run, do not walk, to the nearest exit. And don’t look back.

That Awkward Moment When Journalists Must Write About Their Employer
x
>