AMERICAN JOURNALISM REVIEW
alpha
Reporting on Ferguson ‘Without Hysteria,’ but ‘With Urgency’ 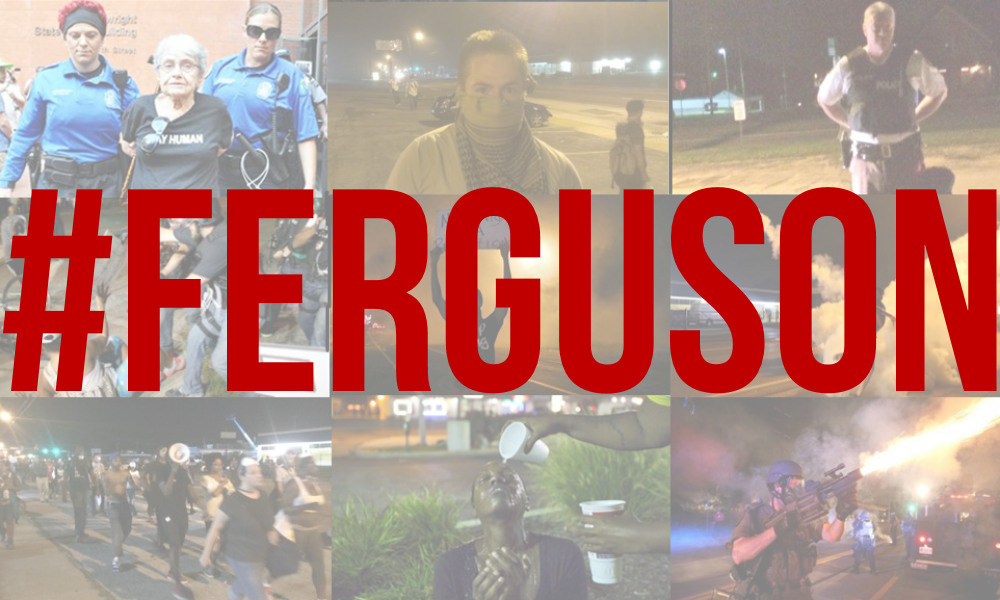 As Bob Rose tells it, the St. Louis Post-Dispatch has done “countless” training sessions on Twitter.

But when the Ferguson story broke in suburban St. Louis, all those tips became reality, said Rose, the paper’s deputy managing editor, online.

There was at least one reporter who hadn’t yet been using the platform.

When the reporter went on assignment in Ferguson, and shared his observations on Twitter, his brand new feed gained 500 followers in four hours, Rose said.

That is just one of the many observations Rose shared in an interview with American Journalism Review this week on the newspaper’s digital strategy as it unfolded during the ongoing story in Ferguson, Missouri, where an unarmed black teenager was shot by a white police officer earlier this month.

Rose had this to say of his staff’s coverage of the incident and its aftermath:

“We have a pretty veteran staff, and they are not very flappable. Some of them have been in war zones. Many of our photographers have. They reported this story without hysteria. But still with a lot of urgency. And so our news report has been outstanding. Our photo report has really distinguished itself.”

Visits to the St. Louis Post-Dispatch over the course of the Ferguson story have been about 50 percent higher than normal, Rose said.

Typically, the paper sees between 300,000 and 400,000 unique visitors per day. Since the police shooting of Michael Brown, and the protests that followed, the paper has seen a couple of days with 1 million unique visitors; every day it has had at least 600,000, he said.

Where is the traffic coming from?

While some observers have suggested that Facebook algorithms have not emphasized Ferguson posts on individual news feeds, Rose said the ratio between site traffic from Facebook and Twitter from before and after the Ferguson new story broke remains unchanged.

How does that observation compare to a snapshot of national site traffic data on Ferguson?

Chartbeat, a web analytics company, pulled data on referral traffic to what it called a “subset of notable news sites” in response to a request from American Journalism Review.

“The interesting thing is that the ratio of Twitter traffic to Facebook traffic was about twice as high for Ferguson stories as for typical stories,” wrote Chartbeat’s chief data scientist Josh Schwartz in an email.

[Graph below courtesy of Chartbeat] 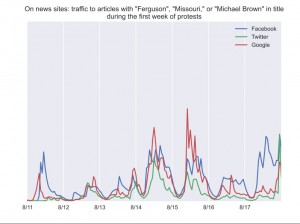 Twitter is commanding a greater ratio of traffic to stories on Ferguson than on other news stories, according to Chartbeat, an analytics company.

There’s no question that a good portion of the Ferguson story has played out on Twitter.

Rose said his favorite tweets from reporters were “Slices of life. Stories that wouldn’t be told otherwise.”

He highlighted a few that he considered noteworthy, including this one from the paper’s night public safety reporter, Valerie Schremp Hahn:

Virgil Williams, 21, of STL, off work today, here since 11, plans to leave bef dark. He dedicated this day to Brown. pic.twitter.com/whXxQ1kncF

And this one from Post-Dispatch staff photographer David Carson: (Of note: The paper adds watermarks to some of its pictures pushed out on social media, to avoid “inappropriate” use of them, Rose said)

The Power of Push

Rose said the paper is pushing out the Ferguson story on multiple platforms, paying particular attention to getting the story in front of readers through email notifications.

“Quite frankly, I thought email seemed so 2010, but it really isn’t,” he said. “It helps kind of cut through the clutter and it really does get people into the story.”

He said the paper sends out mobile alerts on developments on the Ferguson story as well.

Even one year ago, Rose said he was hesitant to send out more than one notification a day.

Now, he said he thinks nothing of pushing out notifications 5 to 10 times a day if the news warrants it.

The paper is also experimenting with desktop notifications through partnering with a company called Roost, Rose said. Even though it only works on the Safari browser on desktop, Rose said it helps the paper test headlines and see what “people are reacting to.”

On the site itself, Rose said the paper is pushing out the story through a variety of methods, including using ScribbleLive, a service used to provide live coverage through tweets.

In some cases, editors have grappled with how to handle story updates, including when and how to make a new headline for a story development as opposed to plunking it into an ongoing article file and pushing old developments down as new ones emerge.

On Sunday, for example, Rose said there was a demonstration to show support for Darren Wilson, the Ferguson officer who police said shot 18-year-old Michael Brown.

That item was initially at the top of the paper’s blog, but other events overtook it, he said.

“We have to be careful about putting headlines on every news item that is substantial,” he said. “There might be better ways to do that. We’re learning on the job.”

Twitter Glitter: 5 Who Shine and How They Do It
x

next story
Twitter Glitter: 5 Who Shine and How They Do It
x