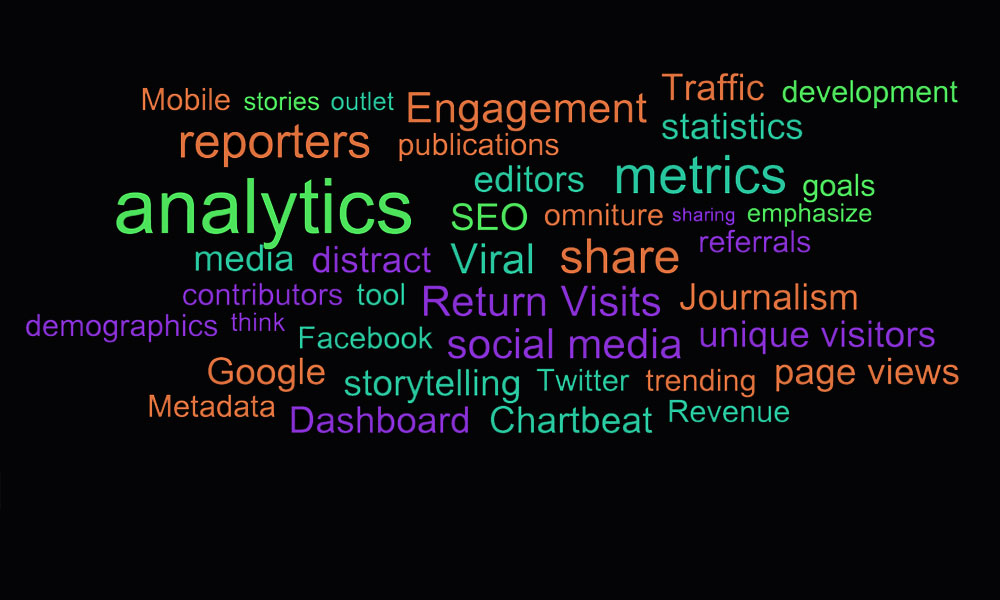 Editor’s Note: This is the first post in a series examining the influence of analytics on how news is produced.

Upworthy, a web news aggregator known for attention-grabbing headlines and viral videos, recently announced a new traffic metric it calls “attention minutes,” reflecting how much time readers spend on the site overall and in each article.

Chartbeat, a web traffic monitoring service, offers a similar metric called “engaged time,” which measures how much time people spend “actively interacting” with articles by doing things like scrolling up and down the page.

ESPN too has its own special metric, called “average minute audience,” which calculates the number of users per minute, according to Digiday, which notes the benefits of this marker; it can capture the number of users during a particular news event and can easily distinguish popularity between devices.

The pageview is fast becoming passé, a number that is easily artificially boosted by photo galleries, slideshows and other tricks. Instead of turning to this metric, news outlets  are seeking better ways to measure reader behavior, combining pageviews with other measures of traffic to get a more comprehensive view of what’s happening on their sites. Some are building custom dashboards, such as the “Ophan” system developed by a hackathon team at the Guardian.

All of these tools reflect the struggle editors and business managers face as they try to figure out which metrics matter most– and whether they should be allowed to influence editorial decisions.

“We give a lot of thought to what exactly it is that we’re trying to do,” said Daniel Mintz, Upworthy’s  head of analytics, via email. “And we believe deeply in the fact that you are what you measure. So, since our goal is to draw massive amounts of attention to things that matter, we thought it was worth trying to measure that directly.”

The ability to see and count what readers do on a website provides a relatively  new source of audience intelligence to the news industry, which historically has relied on self-reporting through surveys to gauge what people actually read.  The data is crucial for a site’s ability to sell advertising, because advertisers demand detailed reports on who their messages are reaching.

While some journalists fear excessive attention to analytics will corrupt the quality of journalism, others believe smarter metrics can help news outlets connect with audiences in meaningful ways.

“The problem with statistics is there are so many of them, right?” said Audrey Cooper, managing editor of The San Francisco Chronicle. “Trying to find which ones are actually most useful and getting it down to a reporter level is not as easy as you would think.”

How then are media outlets judging the size of their readership?

Many publications are outsourcing to large analytics companies, including Chartbeat, Omniture, Quantcast and comScore.

Bennett said Chartbeat alone works with 80 percent of top U.S. publishers, though that doesn’t mean those publishers aren’t also working with other companies as well. For instance, The Los Angeles Times gets reports from Chartbeat, Omniture, Google Analytics and Simply Measured, the last of which focuses solely on analyzing social media metrics.

Some media outlets are going even further and combining all their analytics into personalized consoles. Forbes Media and The Guardian were both early adopters of dashboards that fed their contributors and editors customized data.

Forbes’ “statistics engine” measures metrics, including pageviews, unique visitors and repeat visitors. These numbers are sent back to contributors, who have individual dashboards, as well as an aggregate dashboard for editors, according to an interview Forbes Media chief product officer Lewis DVorkin did with journalism.co.uk in December.

“The data informs what we do — it doesn’t rule what we do,” DVorkin told journalism.co.uk, “but not having it is being blind to what the audience is interested in.”

DVorkin did not respond to requests for an interview.

The Guardian’s dashboard, Ophan, allows writers and editors to see updates much more quickly; before its development, the Guardian had to wait four hours for its analytics to update, according to a recent FastCompany article.

Ophan does everything from tracking traffic based on tweets to telling the site’s backend developers how long it’s taking to load a page on a phone or computer.

The Guardian’s digital audience editor, Chris Moran, said he believes in using data to inform the way journalists work.  He said Ophan helps reporters “determine the best channels for promotion” based on the content of their story and the audience they’re looking to attract.

The San Francisco Chronicle is on the same page as Moran. Cooper has mandated that all her reporters undergo a social media bootcamp, which began in early February. The paper is also in the process of creating individual analytics dashboards that show reporters simple metrics such as pageviews and unique visitors but also engagement time, social referrals and DMA (designated marketing area, which can show how stories are doing in a particular geographic area).

For some publications, though, looking at multiple standard metrics isn’t enough.

To keep up with the demand for a better way to measure audience engagement, Chartbeat’s new metric, called engaged time, tracks “people” rather than “events,” Bennett said, which is the preferred measure for Google Analytics and Omniture.

This precise feedback allows publications to know exactly which content their readers are engaging with — and hopefully gives them hints on how to bring that audience back.

In an email, Mintz wrote he was excited to see that Upworthy is not the only publication developing its own analytics tools. He hopes to see more outlets move in that direction.

“Data is there to help every journalist,” he said. “How wonderful to use it to maximize the number of readers exposed to challenging, important coverage.”

This story has updated comments from Lauryn Bennett, head of brand at Chartbeat.

Confessions of a Clickbait Victim
x
>