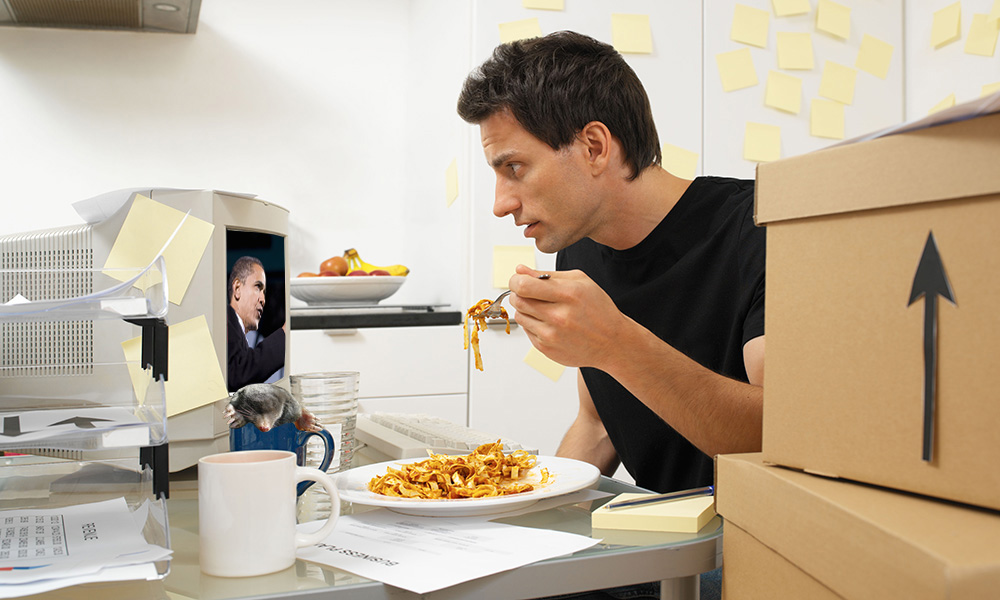 While President Barack Obama was speaking about American diplomacy during his most recent State of the Union address, The New York Times was tweeting about entirely different things: the force with which moles can dig through dirt and how to make the best marinara sauce. 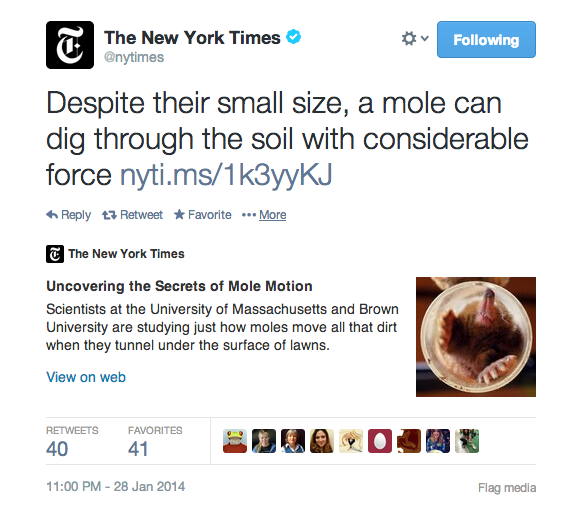 Screenshot of a tweet by The New York Times

The reaction was swift. Twitter users quickly took the opportunity to jab at the legacy media stalwart for seeming aloof during one of the most-watched political news events of the year.

Another gem during the #SOTU,” chimed in another.

The New York Times did not respond to requests for comments on the content of its tweets from during the State of the Union, but many of its followers had a theory: Someone at the paper had prescheduled those tweets.

Good #SOTU strat, NYT. “@nytimes: Despite their small size, a mole can dig through the soil with considerable force http://t.co/Av4TEENwMh”

Prescheduling tweets creates special challenges for news organizations, particularly because they can’t predict when breaking news will happen. Many social media managers said they are starting to pay more attention to how and when to handle a scheduled social media feed to avoid awkward timing.

Using a third-party service to schedule tweets is a common and necessary practice in newsrooms, experts and social media managers say.

Scheduled tweets allow for more regularity, time to edit and overall control than sitting down live at a desktop, perfect for shrinking newsrooms in which smaller staffs are gathering wider responsibilities, Tu said.

“From a practical level, you have to automate,” Tu said. “There’s just not enough bodies in the newsroom.”

As for the Times’ tweets: It’s not entirely clear whether those were gaffes or deliberately timed.

“It might be that an organization like The New York Times says, ‘Yeah, we totally understand that we’re going to seem out of touch by tweeting a story about moles during the State of the Union,’” said University of Southern California journalism professor Mike Ananny. “But that’s a story that might not have gotten a lot of attention if it had not been made visible during a State of the Union moment.

“It’s a tension between using [Twitter’s] rhythms to give those stories this ability versus seeming out of touch,” Ananny said.

A comparison of the Times’ Twitter feed to that of Politico during the State of the Union shows a stark difference in approaches.

The Times’ three original tweets during Obama’s 65-minute remarks had no relation to the State of the Union, according to a review of the newspaper’s Twitter feed between 9 p.m. and 10:15 p.m. on Jan. 28. Rather, the paper’s tweets from the address came in the form of retweets from its politics and government blog, The Caucus.

By contrast, Politico posted more than 20 original tweets in that time, including quotes from the address after inviting its audience to a live stream and live blog on its site before the speech. Politico could not be immediately reached for comment regarding its social media strategy.

Scheduling tweets during large news events can be a nuanced practice, Tu said.

“It becomes a sticky situation when you have things that have a little more gravity or a little more breaking news value and you’re throwing stuff out there that’s not related,” he said.

Take this tweet from Slate’s main Twitter account, one in a series that came out early in the morning of April 19, as the Boston Police Department, in conjunction with the FBI, engaged in a firefight and ensuing manhunt with accused Boston Marathon bomber Dzhokhar Tsarnaev and his now-deceased brother.

“Who is tweeting for you tonight? Scrunchy dog faces? Boston is under siege,” one user wrote.

But Slate social media editor Jeremy Stahl said that the night the Boston manhunt got underway was out of the ordinary for the publication, and its Twitter protocol does not usually involve scrunchy dog faces.

“We have a policy … when something serious is happening to try to put our scheduled tweets on delay,” Stahl said. “That was a situation in which our news team just went to bed.”

In contrast, Stahl said Slate had about 20 tweets ready to be published the day when news of actor Philip Seymour Hoffman’s death broke, at which point he “just turned them off.”

Other news organizations follow similar protocols during serious news events, such as The Baltimore Sun, where social media and community team member Michael Gold said the paper will drop scheduled tweets if need be.

Gold said that his team works to ensure at least one member is always monitoring The Sun’s main Twitter account alongside other news.

“It’s like you’re filling in a blank,” he said. “OK, this is going to happen at 7, so we should leave a little window here so we’re not overflowing.”

Solving the Mystery of Who Sent That Tweet
x

next story
Solving the Mystery of Who Sent That Tweet
x