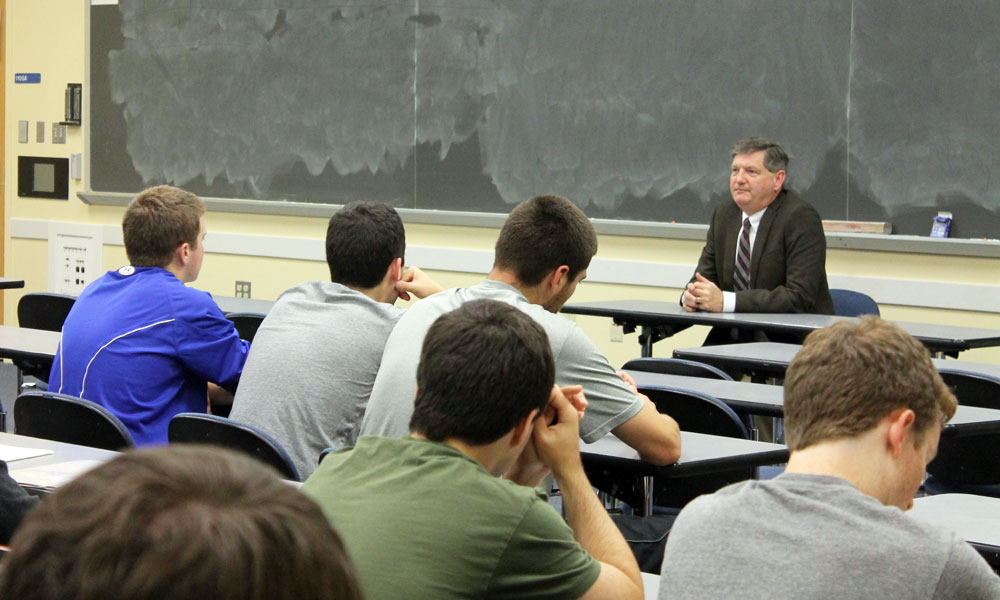 New York Times investigative reporter James Risen says he was more nervous at the start of his marathon legal battle with the federal government than now, even though his ongoing refusal to reveal a confidential source is headed to the Supreme Court and could land him in jail.

“When it first started I was kind of nervous, but it’s been going on for so long that I’m kind of used to it now,” Risen, a two-time Pulitzer prize winner, said in an interview after a recent speech at the University of Maryland. “More people pay attention now because there’ve been some big decisions, but those to me are just like another day in this case.” 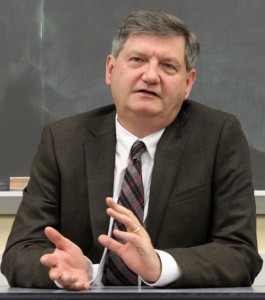 The threat of jail has been part of Risen’s life for five years, ever since he was subpoened in 2008 and later held in contempt for refusing to testify against sources he used to describe a bungled CIA operation in his 2006 book, “State of War: The Secret History of the CIA and the Bush Administration.”

While the legal case could wind up curtailing Risen’s personal freedom, it also could have a much broader impact on the First Amendment — and journalism — if the Supreme Court rules on whether or not the First Amendment protects reporters like Risen from testifying in court.

The case has evolved from being “about a very specific story in my book involving kind of specific leaks, into…..a constitutional showdown,” Risen told students at the University of Maryland last month.

The legal battle revolves around Risen’s refusal to testify at the trial of former CIA officer Jeffrey Sterling, who was accused of revealing details of classified material. A federal District Court in Alexandria ruled in 2011 that Risen was protected from testifying against Sterling by the reporter’s privilege, but that decision was overturned in July of this year by a three-judge panel of the Fourth Circuit U.S. Court of Appeals in Richmond, Va.

The federal appeals court declared that there was “no First Amendment testimonial privilege” protecting a reporter from being compelled to testify in criminal trials. Risen’s lawyers requested reconsideration by the full appeals court, and in October the Fourth Circuit court once again sided with the government, voting 13-1 to reject Risen’s request for another hearing.

“Now we’re going to see what the Supreme Court is willing to do,” said Risen. “But I think the case itself has become very significant in the sense that it could determine what the legal status for reporters all over America is in the foreseeable future.”

Risen acknowledged that appealing to the Supreme Court carries a significant risk for journalism, because if the nation’s top court rules against him, it could mean reporters in the U.S. would no longer have a chance of protecting their sources if those sources are brought to court. That could severely hinder investigative reporting and stories based on government leaks.

“It’s a risk, but you have to take the risk in order to succeed,” said Risen. “I think the problem is that the current status of where things stand is unsustainable. And unless we in the press fight back against what the Obama Administration is doing and before that, the Bush Administration, I think we’re going to continually lose ground.”

During the Obama Administration, the Justice Department has pursued high-profile cases involving government leaks, such as the prosecution of Army Private Bradley Manning for leaking military secrets to WikiLeaks and the attempted prosecution of NSA whistleblower Edward Snowden. Controversy also erupted earlier this year over revelations that federal investigators had secretly obtained telephone records of reporters for the Associated Press and Fox News as part of the government’s efforts to identify whistleblowers.

Risen said he’s fighting not only for his First Amendment rights, but for the right of the press to champion civil liberties, which have been at risk of being trumped by terrorism fears and national security interests since 9/11. He said he thinks people are beginning to realize that the Obama administration’s “overreaching” secrecy is at risk of disrupting the ability of the public to check the government from potentially eroding civil liberties through secret surveillance programs such as the NSA’s PRISM.

“The greater secrecy you have in the government, the greater abuse and corruption there’s going to be,” said Risen. “And that’s what’s going to fester.”

A loss in the Supreme Court or its refusal to hear his legal case could also lead to jail time for Risen, but he’s ready to accept that consequence. He said he has considered going to jail and doesn’t see any alternative at this point.

Risen said his family and publisher have stood behind him from the start, and that his wife specifically pushed him to publish the leaked information and accept the consequences.

“My family’s been very supportive,” he said. “They know that I’ve got to follow this through. And I think they expect me to follow it through, so there’s no question about it.”

If he had the chance, Risen added, he would do it all over again.

But Risen also said whistleblowers deserve more credit for their bravery than reporters who tell their secrets.

“I feel bad that people say, ‘Oh you’re doing great,’ and everything, lauding me for doing this case when in fact, it’s the whistleblowers who are the ones who face the great risk—not the reporters,” Risen said. “They have to put their jobs and their lives on the line.”

That is not to say reporters who reveal classified secrets aren’t putting a lot on the line, too.

“Ever since I wrote the NSA story in 2005 and followed it up with other stories over the next years, I was called a traitor, a spy, anti-American,” Risen said. “People wanted to kill me. I’ve gotten lots of death threats and hate mail and protests outside of my office—I’ve heard everything.

“But, you know, there are also people who say, ‘I really appreciate the fact that you wrote that.’ So you gotta just develop a thick skin, and just write the stories and not worry about it . . . it’s taken me a long time to get that thick skin.”

The Age of iPhone Reporting: Q & A With Neal Augenstein
x
>

next story
Google Glass: A New Frontier for Journalism?
x