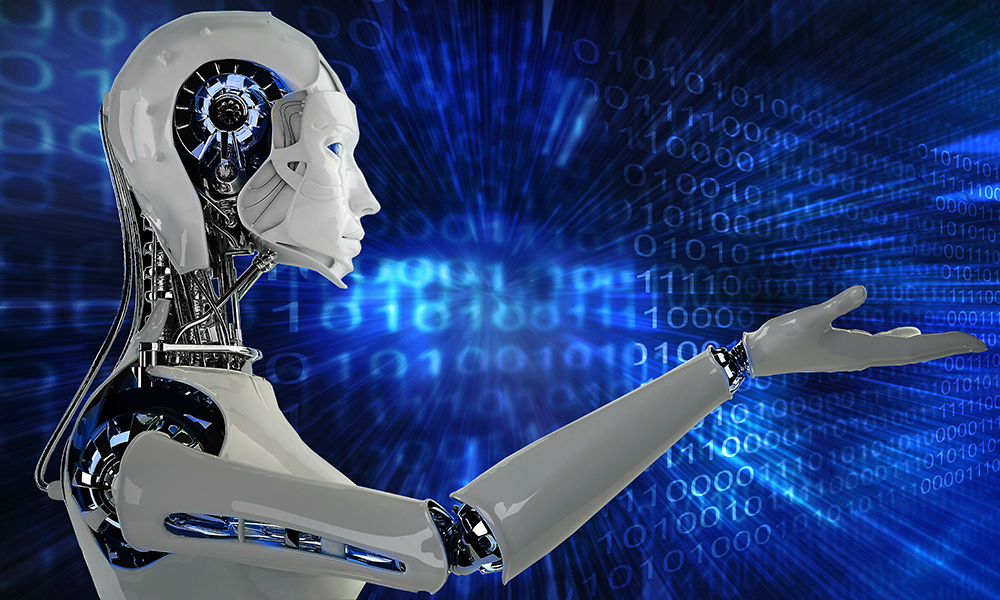 The printing press put a generation of scribes out of a job, and the telegraph sent couriers scurrying to find new employment.

Could software robots do the same for reporters?

That’s one of many questions raised by the emergence of Narrative Science and Automated Insights, two startups that have developed sophisticated computer programs that analyze large amounts of data and automatically generate news stories.

The founders see themselves complementing, not competing with news organizations, and they’re busy partnering with companies such as Reuters, Bloomberg, and Yahoo to help them produce large quantities of stories at a fraction of the price they’d have to pay professional journalists.

“We bring content where it would simply be cost prohibitive to have that content written by a human,” said Kris Hammond, co-founder of Narrative Science.

However, some journalists say that it could alter their role.

Steve Buttry, the digital transformation editor for Digital First Media, said this type of software calls for journalists to step up the value of their work.

“I think that this writing software highlights the fact that if professional journalists say ‘we add value in our writing and reporting,’ then we really need to bring value,” Buttry said.

Consider Gamechanger Media, a mobile media company that launched an app in 2010 to provide scores and other stats about little league and youth sports to fans across the United States. Team scorekeepers voluntarily upload game data to Gamechanger, but the company wanted to give fans more than just stats by offering game recaps and summaries.

“Needless to say, for tens of thousands of little league and high school games every week across the country, there are no reporters there,” said Ted Sullivan, founder and CEO of Gamechanger Media. “But we felt like those parents and fans and school communities deserved the same type of compelling content as professional sports.”

That’s where Narrative Science stepped in.

A Chicago-based company born out of a research project by journalism and computer science students at Northwestern University, Narrative Science developed software called Quill that collects and crunches large amounts of data and automatically spits out narrative stories readers can understand.

The company partnered with Gamechanger in March 2011 to help it produce local sports stories based on statistical data recorded by team scorekeepers. Gamechanger turns its data over to Narrative Science, whose software applies pre-determined rules for structuring game stories and automatically creates recaps for display on Gamechanger’s website. The recaps are part of Gamechanger’s premium service, which costs $7.99 a month.

“We wrote around three million game stories for them last year,” Hammond said.

Narrative Science also is making strides in financial news, where it has partnered with Forbes and other well-known media outlets. Reading Forbes’ earnings previews generated by software, one could easily think the stories were written by a person.

This is largely due to the software’s ability to match the tone and style defined by clients, according to Hammond.

Another company exploring “robot journalism” is Automated Insights, which started producing automated sports stories when the company was called StatSheet Network in November 2010. It rebranded and expanded in 2011 to become a digital media company producing narrative content for business, real estate, health care and other kinds of companies.

Automated Insight’s StatSheet Sports Network, founded first as a single website, statsheet.com, by former Cisco engineer Robbie Allen in 2007, now has more than 400 websites and 500 mobile apps providing in-depth coverage of every college and pro team in the NCAA, NFL and MLB.

The company has more than 10 media clients including Microsoft, Bloomberg and Yahoo, said Adam Smith, Automated Insight’s vice president of sales and marketing.

The company has moved into robotic social media posting too. Its software generates tweets for athletes and sports teams containing “interesting facts like win probability, stat lines, or just interesting things about the individual players,” Smith said. He added that the company has access to more than 2,000 Twitter accounts to help generate tweets.

In addition, Automated Insights partnered with Yahoo last year to create automated recaps for each Fantasy Football matchup during the season.

Here is one example: 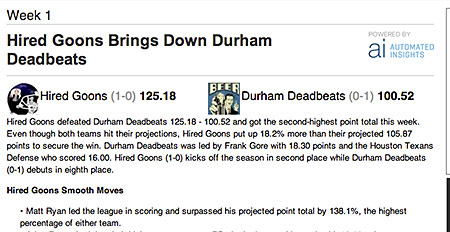 Can you tell a robot wrote this story?

“Instead of writing one article for the millions of people who might play on [Yahoo’s] platform, our software gives Yahoo the ability to write tens of millions of articles for every single team,” Smith said. “We see thousands of tweets and Facebook posts saying, ‘Hey, Yahoo sat down and wrote a story just for me.’”

Will Robots Take the Place of Journalists?

The ability of software robots to write at such scale while still personalizing the content is what makes these companies’ technology so powerful.

In short, the computers can do, in some cases, what humans can’t.

For example, Automated Insights worked with Major League Baseball last year to create Real-time Insights for MLB, a new platform producing a live feed of insights during every game and using the MLB’s 120 years of stats to insert historical  facts and make predictions for each play.

Matt McFarland, deputy high school sports editor for the Washington Post, agrees there’s an opportunity for automated content creation software to help in areas too hard for humans to cover.

“In cases like little league and high school sporting events, I definitely see value in using a computer software because bottom line is it can be unrealistic and just impossible for a media company to go out and cover certain things,” McFarland said.

But could this software actually take jobs away from human reporters?

McFarland said while he sees the software replacing some jobs, he doesn’t think it will substitute for the work of the journalists who can bring quality and in-depth reporting to their articles.

And there are certain things that computers still can’t do with the written word, he said.

“You probably can’t really teach computers to have a little sarcasm or use irony,” he said.

Hammond said Narrative Science is working to improve the quality of its articles by creating “deeper and better analytics, more expressiveness, more interesting parallelism and use of metaphor.” The company also works with clients to get feedback on how to improve its content.

Christina Smith, a third year journalism doctoral student at the University of Iowa, said the notion of computers doing “basic level reporting,”  is “a little overwhelming as a journalist.”

“I hope that it spurs and sparks some energy back into journalists,” said Smith, who spent roughly 13 years in the field before returning to school for her master’s degree and Ph.D. “And they step back and say, ‘Woa, I need to kick it into gear. Because If I don’t, a computer might replace me.”

next story
A Fruitful Search for Journalism Fellowships
x