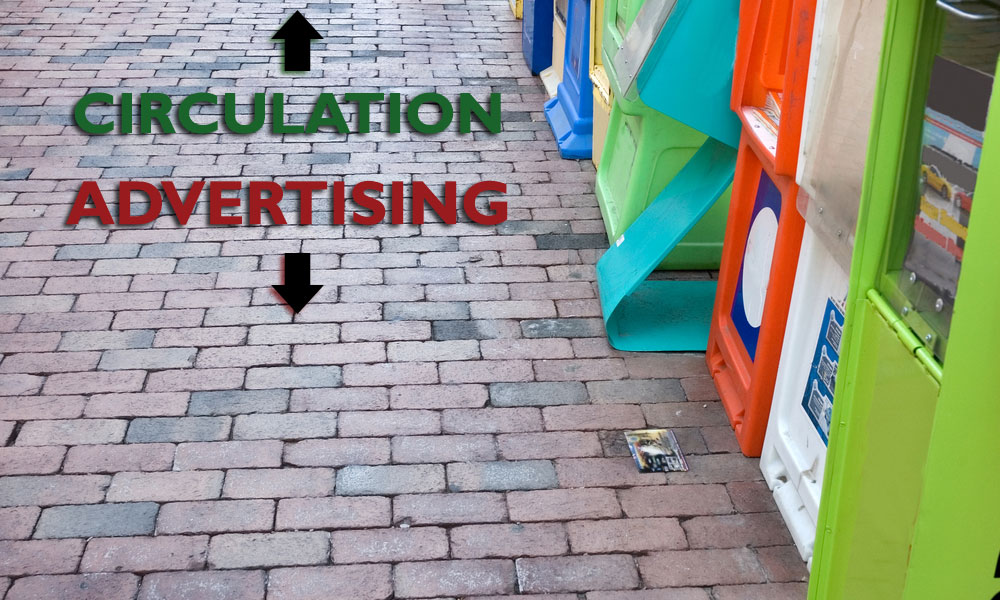 Revenue continued to fall at newspapers last year as modest increases in circulation revenue failed to offset bigger declines in advertising, according to the latest earnings reports from the nation’s large, publicly traded newspaper companies.

Analysts say the good news—if there is any—is that the revenue decline is not as steep as a few years ago, thanks to a small uptick in reader payments from digital paywalls and increased subscription prices.

“I wouldn’t call it a renaissance for newspapers, but I would definitely call it a stabilization,” said Gordon Borrell, a media analyst and CEO of Borrell Associates.

Total revenue fell last year at each of five large newspaper companies–Gannett, McClatchy, The New York Times Co., A. H. Belo and Lee Enterprises–according to a review of their latest financial filings with the Securities and Exchange Commission.

Revenue for all five together totaled $9 billion last year, down 3.3 percent from what they collectively reported in 2012. The New York Times fared best, with 2013 revenue down only 1.1 percent; and McClatchy fared worst, with revenue dropping 5 percent. Gannett, the nation’s largest newspaper chain, wound up in the middle, with a decline of 3.6 percent.

Over the last year of earnings reports, four of the five companies— Lee Enterprises, The McClatchy Co., The New York Times Co., and Gannett Co. Inc. — saw modest increases in circulation revenue, buoyed by a growth in digital paywalls and subscription prices. Those increases, however, were dwarfed by declines in advertising revenue, even though that decline is shrinking.

Analysts say the newspaper industry is undergoing a shift toward greater reliance on circulation, which for years accounted for 20 percent or less of newspaper revenue, but now accounts for 30 percent or more at some papers. But declining ad sales are driving the shift, not increases in circulation revenue, which are so slight they suggest reader payments will not be the saving grace for newspapers.

In addition, many newspapers continue to lose print subscribers, which is exacerbating the overall revenue decline. Borrell said the extra revenue that newspapers are gaining from implementing paywall models at their websites could prove to just be “a supplement and kind of a Band-Aid to eroding newspaper circulation.”

Still, the shift toward greater reliance on reader payments could be significant for the newspaper industry. A comparison of advertising and circulation revenue reported by publicly traded newspaper companies for the fourth quarter of 2013 versus the same quarter a decade earlier shows the growing weight of circulation. It is most evident at The New York Times, where circulation revenue accounted for 27.2 percent in 2003 and jumped to 49.5 percent by 2013. At Gannett, circulation claimed 22 percent of revenue in 2003; in 2013, that share had jumped to 33 percent.

It is unclear, though, how long circulation revenue can continue to climb. And as total revenues keep falling, analysts say newspapers are under pressure to cut back further on the content that keeps readers paying—at precisely the time papers need readers to help pay the tab for ad losses.

Ken Doctor, a media industry expert, said that since its height in 2005, print advertising revenue has declined across the industry by 60 percent. But instead of those numbers bottoming out as expected because “the base continues to get smaller and smaller,” advertising fell again by 8 percent in each of the last two years, and publishers are expecting yet another 8 percent drop in 2014, Doctor said.

“There is some continued growth in circulation revenue,” he said, “but if print revenue continues to go down at 8 percent a year and digital advertising remains flat, news companies will still be below zero revenue growth.”

News companies are reporting some gains in digital advertising, but they are so modest that they can’t stem the loss of print ad revenue. Among the problems news companies face, according to Doctor, are an expansion of advertising outlets online, and the fact that too many advertising dollars are moving to websites like Facebook and Google rather than news sites.

“There is essentially now an infinity of digital inventory, very different than scarcity in print, so you can buy digital advertising anywhere and everywhere,” he said.

Without a way to stop ad losses, analysts say, companies are going to have to cut expenses if they want to remain profitable. And those cuts could make readers less tolerant of price increases, according to Doctor.

“If they’re more dependent on reader revenue year-by-year-by-year, then those readers who are paying more expect a good product,” he said.

There may still be grounds for optimism, though, if newspapers can continue to reduce losses, move toward revenue stabilization and eventually find new sources of revenue.

“It’s one of those things that’s a half glass full, half glass empty kind of scenario,” Doctor said.

Growth may come, he suggested, as companies expand into “third, fourth, and fifth” businesses, in addition to the first two, advertising and circulation. Newer revenue sources include digital marketing services, sponsoring events and conferences, and in-house publishing activities to help other papers looking for publishing services.

If new businesses can grow to about 10 to 15 percent of the total revenue share, Doctor believes they could effectively counteract advertising revenue losses.

* Note: This story has been updated to reflect the fact that the 2012 fiscal year had one more week than the same reporting period in 2013. Had the two periods both contained 52 weeks, these revenue declines would have been less.

next story
Media Shooting Coverage: Is it Fair?
x