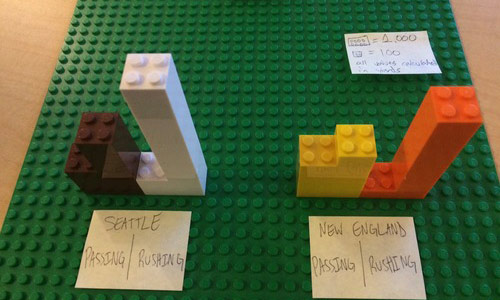 Credit: courtesy of Matt Waite
Students in Matt Waite’s Journalism 491 - Data Visualization course used wide Legos to represent 1,000 yards and narrow bricks as 100 yards. Based on that, the visualization shows that Seattle ran the ball more than New England during the season, and New England racked up more passing yards.
Aysha Khan

As journalism schools across the country scramble to teach their students new skills to keep up with the rapidly changing industry — like data visualization — Matt Waite in Nebraska has an idea.

Start out your early teachings of that particular complex skill by using Legos.

Waite did just that this month when he asked his students in his data visualization course to use Legos to visualize Super Bowl data. He asked his students to use the toys to depict the difference between the Seattle Seahawks and the New England Patriots. (Disclaimer: Waite is careful to say he wasn’t the first to use Legos as data visualization. But he would do it again, he said.)

“They immediately set about discussing what they would visualize and how they were going to make the bricks mean something,” Waite posted on his Tumblr account. “The discussions about scale and how to make a brick represent X touchdowns or Y yards were fantastic.”

Waite, a professor of practice at the College of Journalism and Mass Communications at University of Nebraska-Lincoln, said boiling it down to the basics of visualization ensured students focus on the data, not the intricacies of software tools.

“I think the mistake I made last time was not teaching enough mental tools. So when we got to using software, there were some gaps and students struggled,” Waite told AJR.

When working with data, sometimes the best ideas are the simplest. And it doesn’t get any simpler than Lego blocks.

“The Legos let them focus on representing the data with shape,” he said. “There wasn’t any, ‘Did I miss a semicolon? Did I use the wrong function? Did I press the wrong button?’”

But it’s too early to confirm if his Lego strategy was more effective, Waite said. “It feels right, right now. We’ll know when we start making things.”

The Lego idea is a whimsical spin on the basic teaching method of using simpler tools – like Infogr.am or Tableau Public – to drive home visualization concepts before moving into more difficult coding concepts.

His joking tweet about opening a Lego journalism institute landed in front of Zara Rahman, who’s part of the Open Knowledge Foundation’s School of Data team, which is part of a loose international network that promotes a tech- and data-literate society.

In September, she helped conduct a workshop in Jakarta, Indonesia, that featured Lego data visualizations of the commodity prices and World Bank’s economic development indicators in Indonesia.

Ridiculously cool that an idea @iniandra and I had in Jakarta has found its way to @cephillips’ class @StanfordJourn via @mattwaite <3 Lego!

Legos as storytelling tools in journalism isn’t new. During the 2012 Olympics, The Guardian used the toys in a stop-motion video to painstakingly reconstruct a fencing match. They also used Legos to tell stories of the World Cup 2014 in their “brick-by-brick” series.

It’s not the first time Legos have been used to visualize data, either. Infographic journalist Samuel Granados, now senior graphics editor at The Washington Post, built a 3-D cartogram in 2011 visualizing migration between countries in the Americas.

A year later, General Motors and WellStar Health System developed “a three-dimensional visualization system” using Lego blocks to track their progress in “everything from vehicle repairs to patient care,” using color and size to bring problems to life.

Why did Waite’s Lego activities make a splash among data journalism educators?

“Honestly, I think they’re just a bunch of little kids at heart, getting to play with toys,” he said with a laugh. “Nothing more complicated than that.”

My job right now: making college students visualize data with Lego. I am getting paid to do this. pic.twitter.com/BMhkEPNPFM

6 Strategies for Choosing Your Next Tech Skill
For journalists trying to learn new technology, it pays to have a strategy for deciding which tools to learn.
Aysha Khan
Inside U.S. News and World Report with Managing Editor Lylah Alphonse
‘Experiential Journalism:’ How Virtual Reality Could Depict News in 3D
Live Blog: Computation + Journalism Symposium 2014