AMERICAN JOURNALISM REVIEW
alpha
Is Upworthy Worthy of Your Attention? 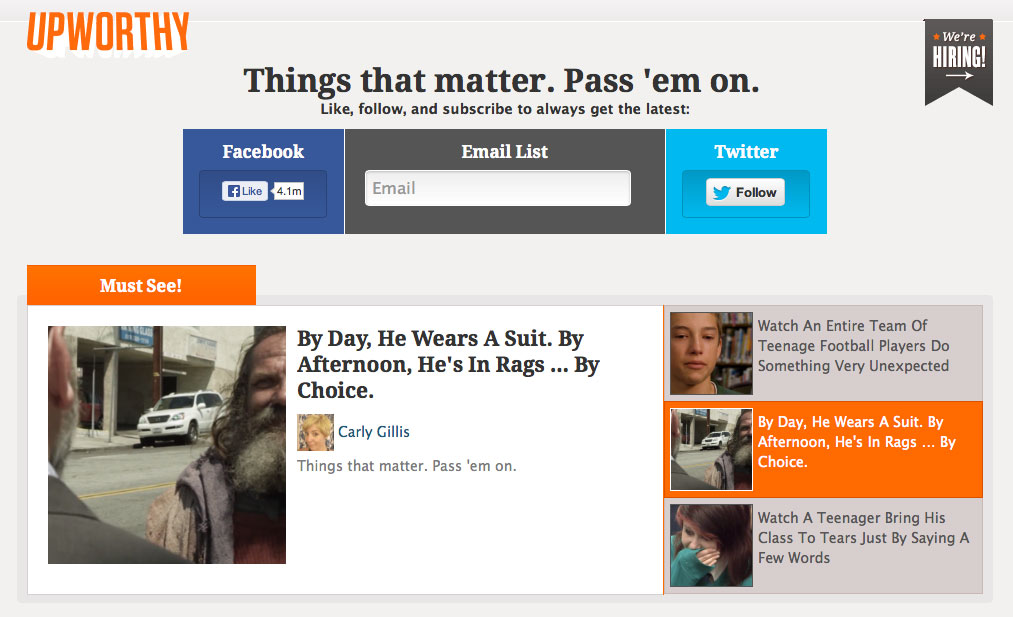 Editor’s note: This is one in an occasional series of articles profiling media startups.

Certain stories are more “worthy” of attention because they matter, and people will gladly share them online if given a chance.

At least that’s the premise behind Upworthy, a fast-growing online curation service launched in March 2012. The social news site proclaims its mission is to “elevate and draw attention to the issues that really matter – from gay marriage to body image to global poverty – through irresistible social media.”

Upworthy creates no original content of its own; it finds videos and stories produced by other sites and helps them go viral.

Peter Koechley, formerly of The Onion, and Eli Pariser, an Internet entrepreneur, co-founded the aggregation site, which employs about 30 editors, curators, technicians and business developers.

The company was hoping to grow its staff to 40 by the end of 2013 as the company expanded with $8 million in a fresh round of funding. Its investors include Spark Capital (early Twitter and Tumblr investors), the Knight Foundation, Catamount Ventures and Uprising, according to a Sept. 16 blog post on its website.  Its  earliest financial backers included Chris Hughes, co-founder of Facebook , and Alexis Ohanian, co-founder of Reddit.

Upworthy appears to be getting as much love from Internet users as from investors. A year and a half after going live, the company reported its site was drawing 22 million unique visitors every month, considerably more than Business Insider or The Huffington Post got during their first two years on the web.

Koechley said Upworthy’s success lies in the way it aggregates news on messages that matter to companies and people.

“We think most people have virality wrong,” Koechley said. “People really do care about things that matter as much as they enjoy GIFs of kittens – the important stuff just needed better marketing.”

Upworthy’s editors and curators work together scouring the Internet, along with freelance contributors, to find content deemed “Upworthy” and then promote it through social media, where young people – its primary audience – are most likely to find it. Videos are among the site’s most-shared content.

“We spend a lot of time understanding what gets attention and then what makes people click and share on social media,” Koechley said. “We’ve passed three million fans on Facebook alone. It’s our primary distribution tool for Upworthy posts.”

One of Upworthy’s most popular articles was a viral hit known as “Zach’s Song,” a story about a boy dying of terminal cancer but achieving his musical dreams before his death.

Among Upworthy’s millions of readers is Bethany Williams, a junior at the University of Kentucky. Contacted via Twitter, Williams said she appreciates Upworthy’s honesty in presenting stories with points of view.

“I do not visit Upworthy for regular news,” she said. “I visit it for articles the news passes over and for stories the general public disregards.”

Like many Internet startups, Upworthy is still working on generating revenue. Its website states that its current business model is “lead generation,” or promoting content to people who may be sympathetic to the causes of sponsors and advertisers.

The company plans to develop more sponsored posts and underwriting, and hyper target stories to invested readers. It aims for advertising that matches the “Upworthy” editorial standards.

While some may wonder if Upworthy’s success in building an audience might lead it to create original news, Koechley said that isn’t the immediate goal.

“Our take is: The thing the Internet needs is not more content,” he said. “We’re trying to draw attention to the best content about stuff that matters — and there’s more than enough great stuff out there already if you do some digging.”

Yet some Internet users see its lack of original newsworthy content as an issue.

Elliot Nash, a user experience engineer and designer, said he considers the site’s content enlightening and occasionally visits Upworthy via links in social media. “It’s definitely not daily, though,” he said. “ I don’t get the feeling the content is new that often.”

Koechley is confident Upworthy’s success can only continue.

“The Upworthy community amazes us every day,” he said. “They are massive sharers and are able to bring the attention of tens of millions of people to things that matter through their actions on social media.”

Inside the WTOP Traffic Center
x
>

‘Lots of Ways to Tell a Story’
x

next story
‘Lots of Ways to Tell a Story’
x