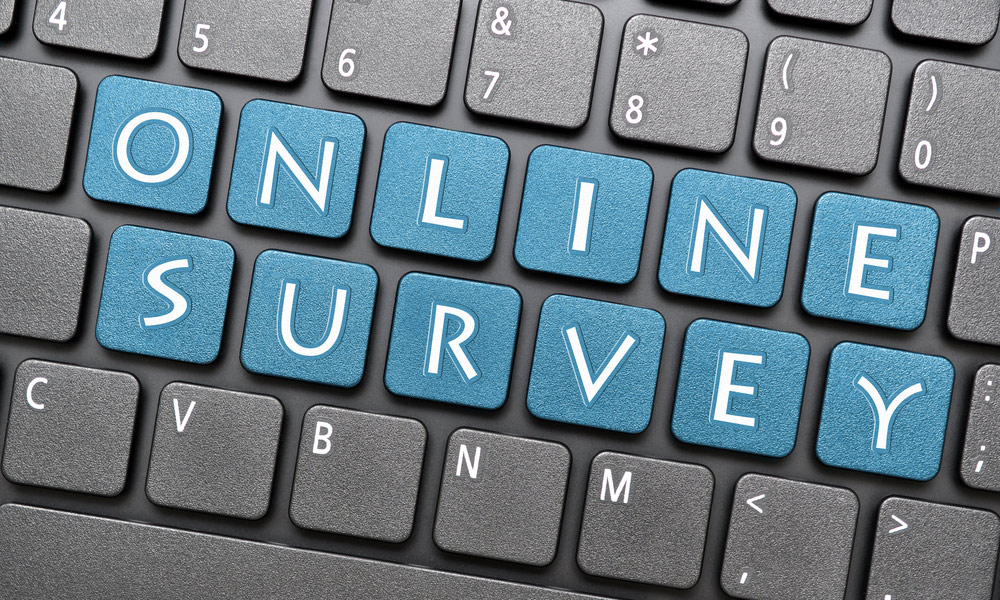 As news outlets seek new ways to fund their journalism, many are asking readers to take Google-powered surveys that typically yield a nickel’s worth of revenue to the outlet.

These consumer surveys are helping some news organizations avoid paywalls, though it’s still unclear how significant their contribution will be to the bottom line.

Since Google launched its consumer survey tool last March, about 300 websites, mostly news outlets, are now using it as a revenue source, with more on the way.

“There are a lot in the queue,” said Matt Villacarte, strategic publisher development manager for Google Consumer Surveys.

The surveys require site visitors to answer a marketing research question, such as who their auto insurance provider is or whether they’re a member of Sam’s Club, in exchange for access to the website’s content.

Google then pays publishers five cents for each question answered. 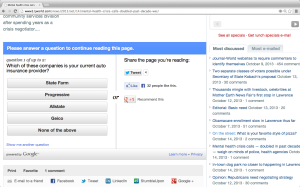 Screenshot of a  Google Consumer Survey

Villacarte said the consumer surveys function as an ecosystem, with companies paying to get market research, publishers being paid for distributing the surveys and Google getting money for bringing them together and contributing the tool.

The size of the publications using the tool varies. Several major publications, including the New York Daily News and The Christian Science Monitor, are using them.

The New York Daily News implemented the surveys last fall in lieu of a paywall and has found them to be an ancillary financial benefit, said Garrett Ward, the outlet’s director of digital operations.

“We didn’t think it was going to be a huge driver for us, but it’s been absolutely steady,” he said.

Ward said the surveys were initially exploratory to see if a paywall would work and the paper plans to continue using them because they are simple and relatively low impact.

In some cases, the surveys make more money than what paywalls would bring in, news leaders said.

Suzanne Schlicht, chief operating officer of The World Company in Lawrence, Kan., which owns a variety of news entities, said the surveys have brought in four to six times what the company expected it would generate from a paywall.

Philip Hall, the digital web specialist for the Clovis News Journal in Clovis, N.M., said he also thinks the surveys make more than a paywall would.

Villacarte said Google designed the tool to allow publishers flexibility in using it based on their needs.

The New York Daily News allows consumers 20 articles a month before giving them the option to take the survey or like the newspaper on Facebook.

Some news websites with a smaller readership, such as the Lawrence Journal-World in Lawrence and the Clovis News Journal, insert surveys into articles more frequently than larger sites.

Lawrence Journal-World asks each site visitor to answer a daily survey question in exchange for 24 hours of access to all the website’s content. The reader also has other options to get around the survey question, such as posting news content to social media or paying to subscribe, Schlicht said.

The survey tools have had a generally neutral impact on readership numbers for publishers who have used them, Villacarte said.

“That also speaks to how intelligently these publishers have been implementing Google Consumer Surveys,” he said.

Some sites have never had a paywall and were concerned about potentially driving visitors away.

But Schlicht said the websites overseen by The World Company have not seen a decline in readership.

Similarly, Hall said the Clovis News Journal’s website, which has between 70,000 and 90,000 unique monthly visitors, has not seen a notable loss in page views.

While the impact appears to be generally neutral, some readers initially reacted negatively to the tool.

Hall said the paper had to reassure some readers that Google was not trying to get their information to build a profile about them.

In other cases, readers may be more likely to leave a site after taking a survey, as opposed to clicking on more articles.

Steve Outing, a digital media news consultant, said Google surveys can interrupt the reader’s flow and cause them to search for a similar story elsewhere online.

“It’s such a different medium than say, television, where you have a captive audience,” he said.

Ward said the New York Daily News has experienced a few complaints from readers about the surveys, as well as a high bounce rate, which refers to the amount of users who leave the site after clicking on one page, among those who hit the survey after their free article limit.

The New York Daily News would also consider changing the frequency of the surveys if it could do more to tweak the design, he said.

Despite these issues, Ward said the surveys provide solid revenue and do not require much maintenance from web editors.

“It runs and manages itself,” he said.