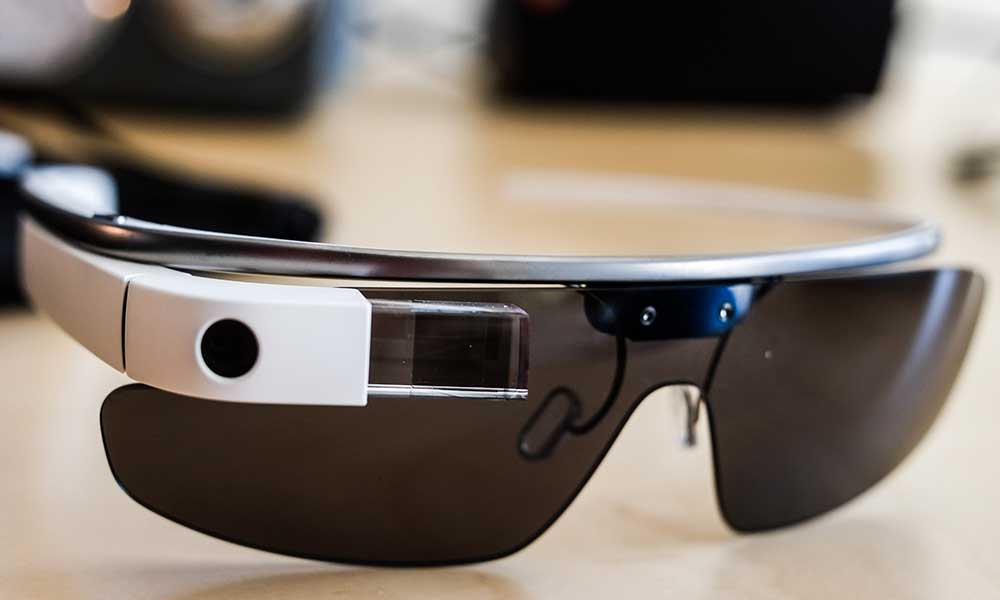 “My dad is a huge tech guy,” the sophomore from the University of Nebraska-Lincoln said. “Like a huge tech nerd. So I grew up constantly being told, ‘You can improve on this. You have to make this better.’”

But as she started taking classes and participating in newsroom internships, she said was surprised by how outdated some of the technology seemed. She’d dreamed of playing with drones and virtual reality, but found many places still struggling to use social media to connect with readers.

“It’s absolutely frustrating to see newsrooms so backwards with technology, just because you can see how much it would help their journalism and their storytelling,” said Lucke, 19.

Undaunted, Lucke is now using her journalism education and tech background to develop a mobile app of her own — “a Pandora station” for travelers that gives social-based recommendations for concerts and other activities.

Lucke is one of many young journalists around the country who are pushing the boundaries in how they tell stories. American Journalism Review reached out to more than 20 students and young journalists to learn more about what kind of technology they think has the most promise to encourage innovation in newsrooms. Here’s what we found.

Hurtado said he pushes the publications on his campus to explore these social broadcasting tools with social media-native content that’s not necessarily branded as news. It’s similar to First Look Media’s Reported.ly project, which live blogs its reporting on Twitter, Reddit and Facebook.

“We’ve been working a lot to create content specifically for Facebook, because a lot of our viewers weren’t necessarily sitting down to watch our 6 p.m. newscast,” Hurtado said. They receive more likes and clicks via Facebook than through their homepage and nightly broadcasts.

“Taking the editing and producing outside the newsroom makes stories that are much more powerful,” Hurtado said. While they may be a little rougher around the edges, these stories are often more active and visual. “Drones would be awesome,” he added, “but I don’t think we’re quite there yet.”

It’s no surprise that Wheaton is itching to document the Midwest’s environmental and agricultural issues with overhead drones. After all, he joined the Drone Journalism Lab at the University of Nebraska-Lincoln when it was founded in 2011, though practical experience is scarce since drone journalism is illegal. Federal Aviation Administration regulations currently prohibit use of commercial drones, but proposed laws may leave latitude for journalists.

“We’ve tried several different kinds of drones to fly, including the white one with the four blades you’ve probably seen,” Wheaton said. That’s the DJI Phantom, he said, but they’ve also played with others: fix-winged, quadcopters, hexacopters and more.

“It’s about telling stories in ways we don’t think about generally, and gaining a different perspective,” Wheaton said. “These aerial shots give viewers something they’re not used to seeing.”

But because drones can give a literal picture of scale and change through aerial shots, they’re particularly great for environmental stories, Wheaton explained. They could show the path of the Keystone pipeline, or the state of the cattle industry.

Before the FAA told it to cease operations, the Drone Journalism Lab team used small drones to report on a 2012 summer drought in Nebraska. “You could see for miles up in the air just how dry the entire riverbed was,” Wheaton said. “Which is funny, because everyone jokes that the Platte River is a foot deep and a mile wide.”

Li dreams of getting her whole newsroom set up with Google Sheets. It may not sound glamorous—but hear her out.

She uses the live spreadsheets as a powerful content management system through Tarbell, a site authoring tool from the Chicago Tribune’s News Applications Team.

“I was originally planning to just code something and teach people how to upload photos, which would take a lot of generations and teaching new editors,” Li said. But everyone can figure out a basic spreadsheet. 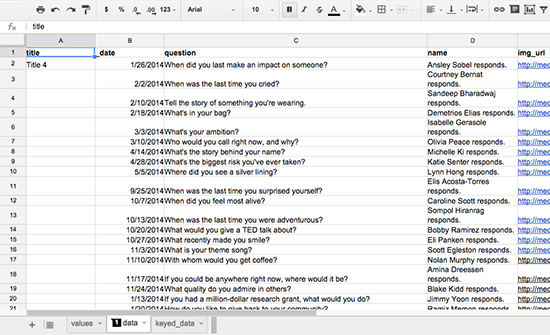 Now that Li has configured Tarbell, the editorial team works directly in the spreadsheet. They add interviewee portraits, audio files, and associated metadata – reporter, date, etc. The data that editors add to the spreadsheet feeds directly into a website Li coded, operating much like a CMS. 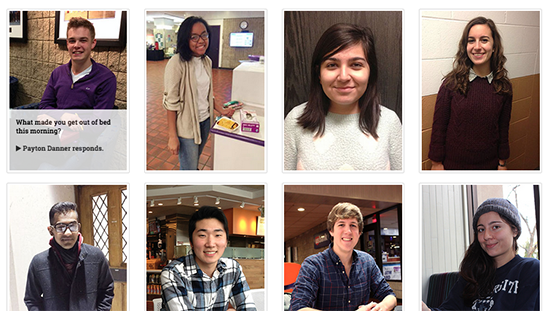 “One,” is an audio profile project from North by Northwestern. The site is not yet live. Screenshot courtesy Anne Li

“What’s great about integrating Google spreadsheets and Tarbell into websites is that it brings the technology and the traditional reporter so much closer,” Li said.

It could also work as a gateway into coding for interested journalists. Li herself first used Tarbell as she ventured into coding her portfolio site, helping her learn to navigate issues by reaching out to the online coding community.

But non-coders who’d rather avoid tripping over the wires won’t have to look beyond the intuitive spreadsheet, she said. “It just makes it easier for the traditional reporter to think about storytelling with the Internet in the back of their mind.”

Sam Hart, 21, and Alex Duner, 19, editors at North By Northwestern

The online magazine puts out regular, uber-cool interactives: weekly news quizzes, a “What Obama Did During His Visit to Northwestern” generator, a handful of projects built outside the CMS.

How? Interactive plug-and-chug tools, which editors can use to quickly generate quizzes, flowcharts and more.

“The idea is we want our editors who might not have as much experience with HTML and CSS to be incorporating these new formats as easily as possible,” said Hart, editor-in-chief.

Like in any newsroom, it’s difficult to balance long-term experimental projects with the day-to-day production rut. Recyclable templates don’t always create the most innovative stories, Duner said. “But it gives us time to work on more ambitious projects,” he pointed out. “And it gets everyone in the newsroom thinking about how to tell stories using timelines and flowcharts.”

Tony Papousek, 21, self-proclaimed news nerd at the University of Nebraska-Lincoln

“For me, it’s not so much getting my hands on the technology as it is making the technology to assist myself in the newsroom,” Papousek, a computer engineering student-turned-journalist, said. 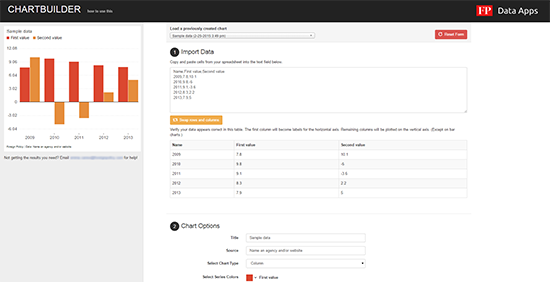 He uses open source programming languages like Ruby, Python and R to build scraping tools and apps – for free. The only investment is time, but that’s nothing, Papousek said. “You just have to go online, type in a few key words, and bam, you’re set up and ready to go.”

While he’s inspired by story bots – algorithms that zip through massive databases of articles and churn out thousands of stories in seconds, without a single reporter – his own projects are a bit humbler. “I’m working a little with this stuff, but I don’t have anything published,” he said.

Lately, he’s working on a crime-tracking application that scrapes the campus police database daily, and then standardizes and visualizes the data. “The local police don’t put out the data in a format the program can understand,” he said. “They’ve been pretty stubborn about that, but I’m getting around that slowly but surely.”

“I tinker around with code and data, while doing journalism at the same time,” Papousek said.

The uncertainty of journalism’s future is less about the job market, he said, and more about the breadth of tools available. “The biggest struggle for me is deciding what to learn and what to apply, in hopes that I go in the correct direction. All you can do is guess.”

Last semester Brigida was part of an attention-catching course that taught USC Annenberg students to use Google’s augmented reality glasses for reporting and storytelling. The class – which included mostly engineering and journalism students – built Glass Genius, an app that uses a “real-time audio knowledge engine” to add background information on top of the video Glass films. They also filmed a series of minute-long point-of-view videos, like the one below.

Brigida edited this video of cooking from a chef’s perspective, captured by the wearable technology’s shaky camera. “We had this joke that humans aren’t very good tripods,” Brigida said.

In January, Google stopped selling its first version of Glass, a wearable experiment with augmented reality, to work out the kinks in a more affordable version yet to come. Sony released a clunkier alternative in February, but Glass itself is thriving in enterprise, as well as in medicine and industry. Tech leaders say the future of wearables is bright.

Wearable filming tools like GoPro and Glass make for storytelling experiences with perspective, she said. She’s now using Glass for a point-of-view video project of an L.A. stuntwoman’s performance. Her newsroom is thinking of using Glass to create a narrated tour of south L.A. for the anniversary of 1965’s racially-charged Watts Riots.

“Even if Glass isn’t widely used, the class made us start thinking of how to tell news in a digital world,” Brigida said. “Maybe it will come and go. Maybe I’m not using Glass tomorrow, maybe it’s a new tool. But I’ve learned the mindset to adapt content production to a new tool.”

Until recently, Oliveira’s journalism experience was limited to writing and video. This semester, she’s designing apps and coding.

“It’s never something I thought reporters would be doing hands on,” she said. “While we’re still going out and getting information, being able to create it on these platforms gives you more control.”

Her app development class’s first client is the school’s Digital Lounge, a resource and workspace for playing with software. Her team is designing a mobile app for the Lounge’s video tutorials and to list upcoming workshops. They’ll soon also create a mobile showcase for another class’s audio profiles. 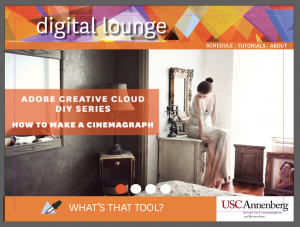 “Nowadays, everyone’s doing everything on their phones or tablets. If they have a minute or two to spare, that’s where they’re going,” Oliveira said.

For media, the importance of web presence is well established. “But without a mobile presence” – a smartphone or tablet app, or even a responsive website – “you’re missing out on a large audience,” she said.

With task-management app Trello, users can organize tasks and assign them members and deadlines. It can be integrated with Slack, a team chatting app that also works with dozens of other collaborative tools like Google Drive, Trello and GitHub.

“I don’t end up with a thousand email threads that I have to work my way through,” Lee said. “And then Trello keeps everyone informed of what’s happening in every angle of the project.”

When Studio20 helped transition the start-up Storyful to an “agile newsroom,” they used Slack and Trello to keep track of their progress and see a bird’s eye view of their work, said Lee, who’s interested in a newsroom management and digital strategy.

Annoying the hell out of my @Storyful colleagues with my new-found enthusiasm for @SlackHQ – if your newsroom doesn't use it, it should.

Tools like these create an innovative workflow, Lee said, to ensure collaboration is “purposeful” and allow everyone to see and understand newsroom projects fully.  When a team is willing to accept changes, new tools can offer advantages.

“You have to want to use it. I’m not just going to throw Trello or GitHub at you,” Lee said. “But I think applications like these are effective and efficient, and you have to see that before you can use it yourself.”

Here's @mat on @stewart. Nice piece. But our group of tech journos at NYT couldn't stick with Slack. Alas. http://t.co/vKdShBfv75