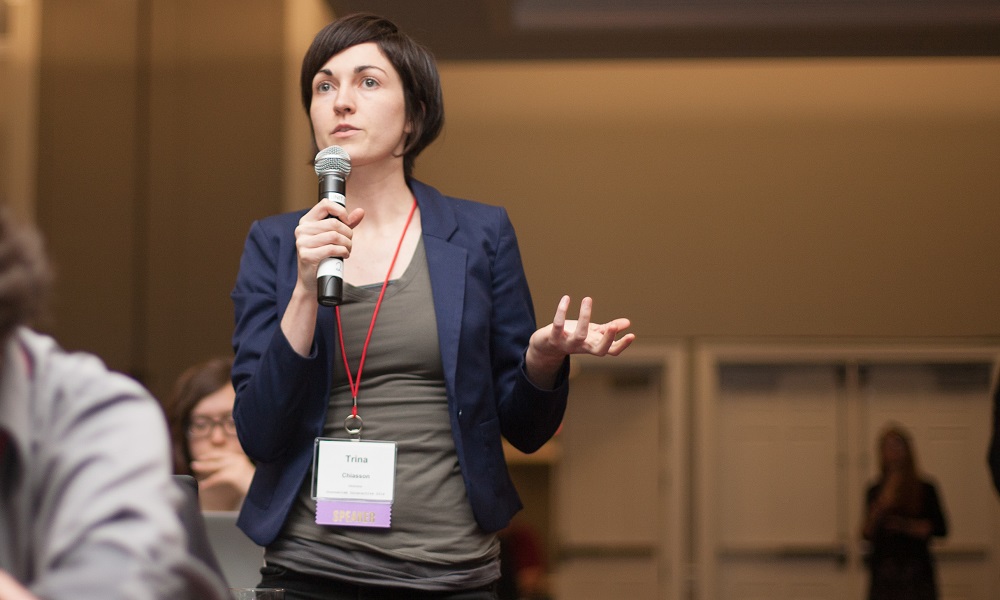 It’s getting easier to launch news start-ups, but being an entrepreneur is not for everyone,  three media company founders told an audience of journalism educators at the 2014 Journalism Interactive Conference.

Entrepreneurship takes more work than the average person is willing to do, said Trina Chiasson, CEO and co-founder of InfoActive, a start-up that is creating an online platform for infographics.

“It takes relentless testing, iteration and using analytics to drive decisions,” Chiasson said.  She believes entrepreneurs must understand why they are making decisions and constantly question the decisions they are making — and not everyone wants to put in that amount of effort .

The first decision, though, is whether to even start a company.

“Two things you need to know about media start-ups: Start-ups are easy to do and very hard to do,” said Mark Potts, founder of Newspeg, a visual aggregation service for news.

Starting a media service is much cheaper than it used to be, Potts said, thanks to free, open-source publishing platforms such as WordPress and Drupal; the rise of collaboration and sharing tools such as Skype, YouTube and Google Plus; and inexpensive technology training services such as Lynda.com. In fact, it’s almost  free to start a media business today, Potts said.

Yet it is also hard, he added, because most start-ups still fail. While a ton of social media platforms and networks have launched, only a handful achieve the kind of succcess of Facebook and Twitter. The same is true with news startups, according to Potts.

That’s why it’s important for media entrepreneurs to do something unique, another panelist said.

“Make something new. Make something interesting. Make something insightful,” said Rob Malda,  chief digital strategest and editor-at-large for a social news app called Trove, who was the third speaker in the April 4  session at the University of Maryland.  In addition to his recent work with Trove, Malda founded one of the Internet’s earliest news aggregators, a technology news site called Slashdot. 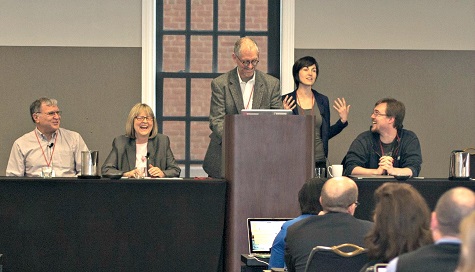 Both he and Potts are serial news entrepreneurs, who have worked at a variety of companies trying to develop new ways to present the news. Now Malda, Potts and Chiasson are all trying to develop innovative news products that will stand out from the pack. Here’s a look at their latest creations:

TROVE — Trove is a social news reader launched in January by Graham Holdings Inc., the company formerly known as the Washington Post Co. Tove’s app allows users to create a personalized news stream filled with information tailored to their interests. Users can curate streams or “troves” containing articles they like on just about any topic, and follow troves created by others. The idea is that active users will select or highlight the “best” articles in areas where they have expertise, which will help others with similar interests find articles they like. Trove is filled with user-curated channels on  topics as specific as Star Wars–  Malda’s personal favorite–and as broad as politics.

NEWSPEG — Potts described his product as “Pinterest for news” and said it cost less than $100 to create. Like Trove, Newspeg offers a tool for social curation of news, allowing people to select stories they like from around the web and share them in Newspeg’s visual news gallery. Users “peg” stories to Newspeg much as people “pin” images to Pinterest; the layout and design of the two sites are strikingly similar.  Many people use Newspeg to save articles they like for future reference, according to Potts.

INFOACTIVE —  Unlike the other two services, InfoActive is still in the private beta testing stage and is not about curating or aggregating news. It’s about visualizing data. Its mission is to help people and newsrooms create visually appealing  infographics to display complex data in a format that allows people people to engage and interact with that data, not just look at it. Chiasson sees a pressing need in newsrooms for a simpler way to create infographics with data visualizations.  She said infographics have a bad rep because they can be so difficult to create. InfoActive is designed to not only simplify that process, but also to make infographics more valuable by allowing users to “filter through the data and see it in new ways.”

All three founders acknowledged the formidable nature of the challenges and competition facing entrepreneurs, especially in media.

With odds like that, only time will tell if these start-ups can be the next big thing.