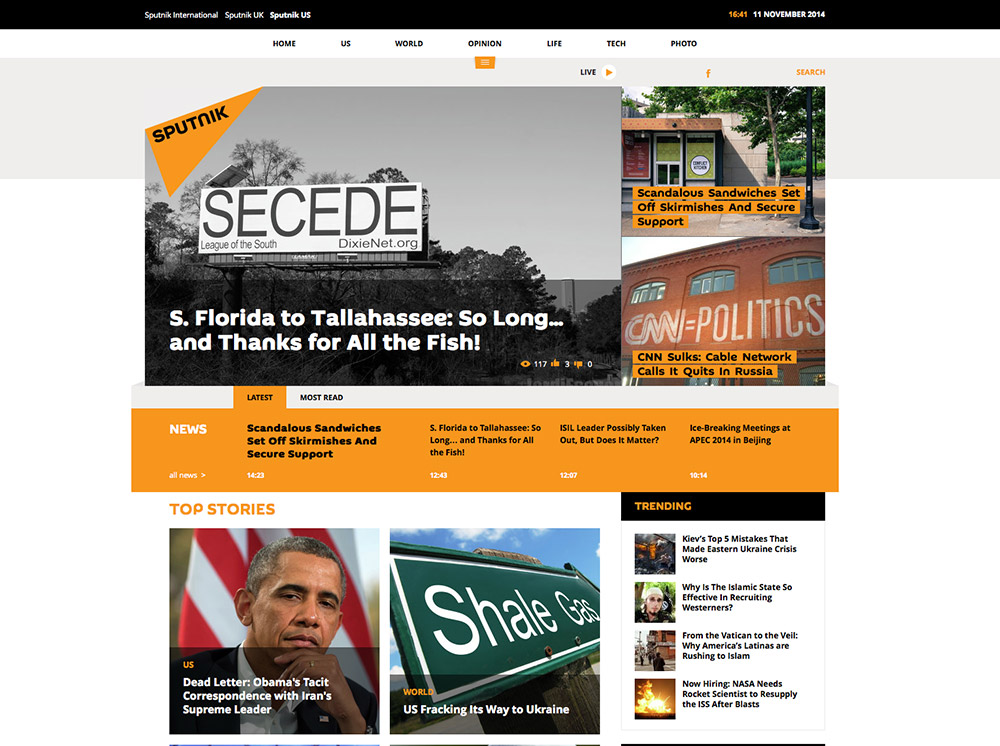 The Kremlin is strengthening its propaganda arm with easy-to-read news websites and radio programs around the world. Dmitry Kiselyov, the head of the government-owned news agency Rossiya Segodna (Russia Today, formerly RIA Novosty) announced Monday that the company is creating multimedia news bureaus around the world to produce radio programs and websites in 30 different languages.

Russia’s new media brand is called Sputnik, named after the first satellite that Russia sent into orbit. Smart and telling choice of name: Moscow beat the United States in 1957 by sending Sputnik 1 into space four months before the U.S. managed to do the same with Explorer 1.

Sputnik will have bureaus in cities such as London, Paris and Washington, D.C. and Beijing, according to Kiselyov. Sputnik is planning to cover over 130 cities and 34 countries, with over 800 hours of radio programing a day, he told the Telegraph.

Kiselyov said the rationale behind Sputnik was a need to counter Western propaganda. “We are against the aggressive propaganda being fed to the world,” he told The New York Times. “We believe that it is not real. We believe that it leads to suffering. Blood. And there is nothing good along that path.”

It is a telling coincidence that on the same day Sputnik was revealed, CNN announced that it would stop broadcasting in Russia because of new media ownership regulations demanding that foreign ownership of media companies not exceed 20 percent.

The Kremlin already has a propaganda arm: It created the TV channel and website called Russia Today in 2005. Trying to get rid of the stigma of being connected to Moscow, it was rebranded as RT in 2009, and has since built a large, growing global audience on the Internet at RT.com. With its budget steeply increasing each year, RT is already broadcasting in English, Spanish and Arabic. It started operations in Great Britain last month and it is planning a channel in French.

The U.S. edition of Sputnik, after two days, seems like a lightweight version of RT. It writes about how the U.S. might have a vegetarian president by 2020 and offers listicles like “Five Things That Drive the West Mad about Russia.”

Judging by its aesthetic, it seems the creators of Sputnik looked to cutting-edge digital native sites such as Vox or Vice in formulating the design.

Foreign Policy called it the “BuzzFeed of Propaganda” in a headline. After a quick content analysis on its first day, Foreign Policy concluded that the “tightening of state control [of Russian media] has resulted in something so remarkably fluffy is a measure of just how savvy the Kremlin’s spin doctors are.”

3 Reactions to the FBI Impersonation of a Reporter
x