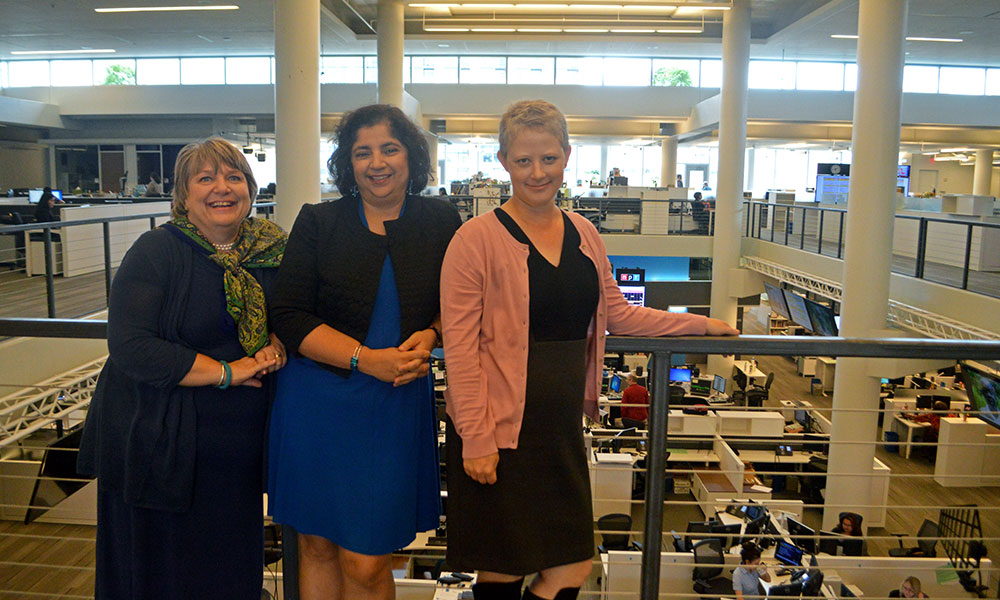 Few Americans would cite radio as their primary source for news in 2014.

“Morning Edition,” a two-hour weekday morning news show that delivers a conversational mix of hard news and human interest pieces, has long ranked as America’s most popular radio news show. About 12.3 million listeners tune in to the bicoastal show each week, according to 2014 spring Nielsen data, making it the third most-listened-to radio show in the nation.

Such impressive numbers raise a question: How is a lengthy radio news program sustaining its audience in an overwhelmingly digital — and fractionalized — media landscape?

Industry experts say both the present and future looks bleak for radio news programming. After a rush to consolidate in the late ‘90s, and the advent of Internet-based streaming and on-demand services, new owners cut newsroom staffs to pare expenses and ignored the impact of the rising millennial generation, says Jerry Del Colliano, a radio industry analyst who runs a company called Inside Music Media.

Morning Edition’s past and present producers have a variety of theories for the show’s remarkable ability to retain a mass audience. One is that as people’s lives grow busier and more fragmented, they increasingly crave the kind of in-depth news reporting that is a hallmark of the show. 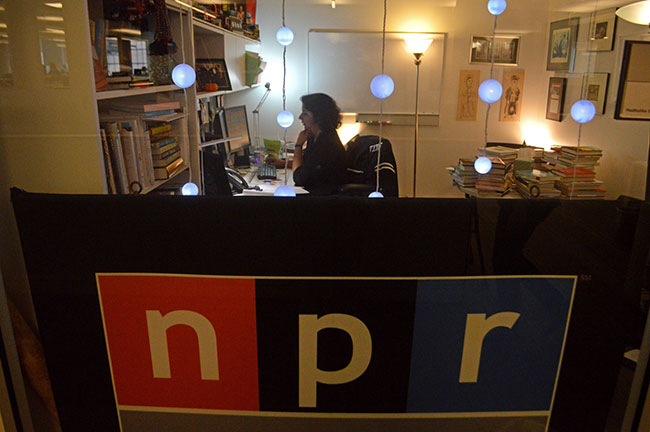 “I think the reason there’s still space for a magazine show is that people are still busy, and they want the world sorted out for them a little bit,” said Madhulika Sikka, who produced the show from 2006-2013 and is now executive editor for NPR News. “So in the mornings, when they have a lot of other things going on and may not have time to read the paper or check in on other news sources, [Morning Edition] is there — it’s your companion in the kitchen, in the car.”

David Bernstein, general manager of Talkers Magazine and longtime radio station manager, attributed consumers’ shorter attention spans to the vast number of outlets vying for that attention. The equation is simple, he said: People will stick with a program if it’s interesting and useful to them.

“A lot of stuff on the radio you can take or leave,” Bernstein said. “NPR’s not that. If Morning Edition is cutting through the clutter, they deserve to be listened to for longer periods of time.”

Made For Multitasking and iPhones 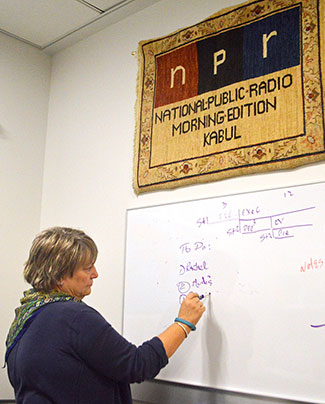 The show is also made for multitasking, points out Ellen McDonnell, who started at NPR in 1979 and was executive producer of “Morning Edition” from 1998-2007. People listen while multitasking, and they also time-shift, NPR’s focus groups have shown. They start listening to something on the radio, become interrupted, and return to the show at night on a computer, phone or tablet.

And according to Bernstein, that also illustrates one of the most significant news trends affecting radio in the digital age: Consumers’ desire for on-demand programming.

“I may love Morning Edition, but not wake up until noon because I have a night job,” Bernstein said. “There’s no reason I shouldn’t be able to listen to the show just because I don’t tune in when it airs.”

Lynsay Ayer, of Washington, D.C. takes advantage of “Morning Edition” both in real time and on demand, saying her day is punctuated by the program she’s been listening to for 12 years.

“I listen on my iPad or iPhone while feeding my daughter when she wakes up in the morning, and then on the radio while I get ready for work, eat breakfast, check my email, and so on,” said Ayer, 34. “On the Metro on the way to and from work, I use the iPhone app to catch up on the stories that I might have missed.”

Ayer’s experience illustrates what may be a practical factor in the show’s continued success, something that may also be contributing to the decline of print journalism: the iPhone. With smartphones now a primary media device for many people, radio — a very old medium — is well-poised for the future, said current “Morning Edition” executive producer Tracy Wahl.

“People can take it anywhere,” Wahl said. “The smartphone is sort of today’s transistor radio.”

And like the iPhone, the program can fit around your life in a way TV can’t, even with on-demand viewing, said Sikka. She sees the massive transition to digital as ideal for the show’s competitive advantage.

“We have so many more platforms where our audio storytelling can be told and heard. If the scheduling doesn’t work for people on their local stations, they can listen later or on our app,” she said. 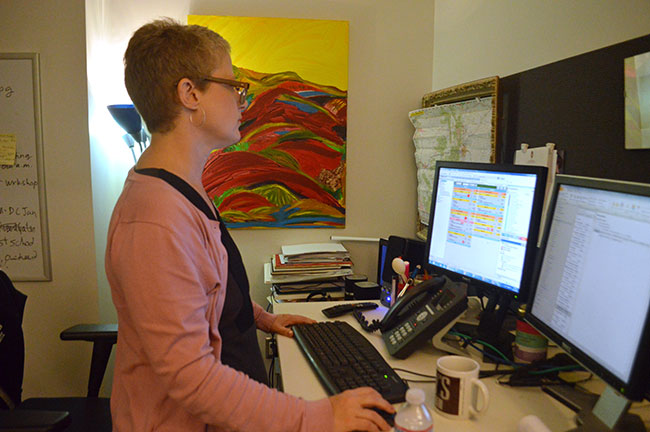 Longtime listeners like Eli Koppel of Takoma Park, Md., often wake to the show, then switch to mobile devices as they move throughout their day.

“My alarm radio is set to NPR,” said Koppel, 38, who’s been listening since he moved to New York in 2001 and couldn’t afford a TV. “Then, when I go to eat breakfast with my children, the kitchen radio has on “Morning Edition.”  If I’m in the car, I listen to the show on 88.5 WAMU.”

NPR’s behemoth social media presence — the organization has more than 4 million likes on its general Facebook page, and its combined Twitter feeds reach nearly 5 million followers — boosts the show’s success with digital audiences, too. Wahl, who spearheaded Morning Edition’s digital strategy on Facebook and Twitter as its supervising editor back in 2006, said the organization’s reputation and the personalities of its hosts are vital in maintaining a vibrant presence on social media.

“[Morning Edition host] Steve Inskeep is very active on Twitter especially, and I think people really value having that kind of much closer-up relationship with him,” Wahl said. “Facebook is now a place where people go to get info about all sorts of things, and I think the fact that we are a part of that content flow is really critical.”

Inskeep and fellow “Morning Edition” co-hosts David Greene and Renee Montagne are a huge part of the show’s “secret sauce,” said McDonnell, who pioneered the show’s unique bicoastal, multiple-host (first two, now three) format. What today’s listeners hear each morning is an inviting yet authoritative rundown of the day’s news — a style that Sikka dubbed “wonk and whimsy” during her years at the helm — that evokes images of the three co-hosts sitting together over coffee.

That couldn’t be further from the truth. Montagne and Inskeep anchor the show thousands of miles apart: Inskeep, and now Greene, host out of Washington, D.C., while Montagne arrives at NPR West’s Culver City studio around 1:30 a.m. each morning to host from the opposite coast.

McDonnell refers to Montagne and Inskeep — who began hosting together as fill-ins while other hosts were on vacation — as “the blind date that worked.”

“Steve made Renee sound better, Renee made Steve sound better,” she said. “What they had was chemistry. And that’s what you need in great programs.”

The hosts, now with Greene on board, are invested in each other’s success in a way “you don’t see anywhere else,” McDonnell said.

Aside from its untraditional host format and signature sound, the show’s content itself sets “Morning Edition” apart from other news programs. Sikka said that multifaceted approach to news reporting is a deliberate reflection of NPR’s audience. “Wonk and whimsy” — reporting that includes war, policy, business, culture, television — developed out of an attempt to satisfy her own “news itches.”

“I think it’s just really important to mix it up,” Sikka said. “People are not one-dimensional; our audience is not one-dimensional. There’s so much out there to report on and we have the luxury and the privilege of being able to do that in a two-hour magazine show every morning.”

But a few decades ago, the show couldn’t have looked more different, said McDonnell, a veteran of the newsroom who celebrates her 35-year anniversary at NPR this year along with the program. The magazine format still guided its programming back then, when popular host Bob Edwards anchored the show solo for nearly 25 years, but the operation was humble in scale. 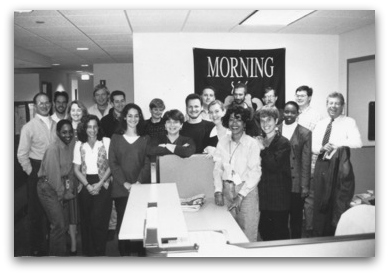 Ellen McDonnell with the staff of “Morning Edition” in the 1990s, around the time of the show’s 15th anniversary.

“What you had in 1979 was a two-hour, studio-based program that was sent West with very minimal changes, if at all,” McDonnell said. “What you now have is seven hours of vibrant, changing, up-to-date news programming that reflects the mornings where people have limited time and attention and want their information in-depth, but they also want a relevance to it.”

Those seven hours of live updates are produced by a rotating, 24-hour staff of 38 people, most of whom are included during morning editorial meetings, said Wahl.

That’s a very different format than “Morning Edition” saw 10 years ago, when it had just expanded to the two-host format. McDonnell recalled crowding with staff into Inskeep’s office during those early years, with Montagne on speakerphone, trying to have an editorial meeting on content for the next day’s show.

Now, the hosts communicate seamlessly over video and audio both during the planning and production process. The show incorporates a “constantly evolving” visual web strategy, said Wahl, which includes one social media staffer and collaboration with NPR’s visual team on accompanying videos, infographics, bloggers and photography.

But despite its current popularity, does Morning Edition’s in-depth radio reporting have a place in journalism’s uncertain future?

Colliano, who used to teach classes in generational media at the University of Southern California, warns that people in radio don’t fully understand the sea change that is represented by the millennial generation.

“I love NPR and it is the cream of the crop, but I get the sense that even NPR is imitating itself — that’s what happens when we get successful,” he said. “Many of its shows sound like other successful NPR shows. I know NPR is trying to innovate but it needs to try harder in my view.”

But the people behind “Morning Edition” aren’t worried.

“Everything is constantly flowing and changing and moving,” Sikka said. “But we’re comfortable with where we are, and we know where we’re going.”

Correction: An earlier version of this story misstated when Ellen McDonnell started at “Morning Edition” and the number of employees currently working to produce the show. This version of the story also expands the number of NPR’s Twitter followers to include additional accounts.

Inside the Mind of a Weed Journalist
x

next story
Inside the Mind of a Weed Journalist
x