AMERICAN JOURNALISM REVIEW
alpha
The Yo App: Ridiculous or Revolutionary? 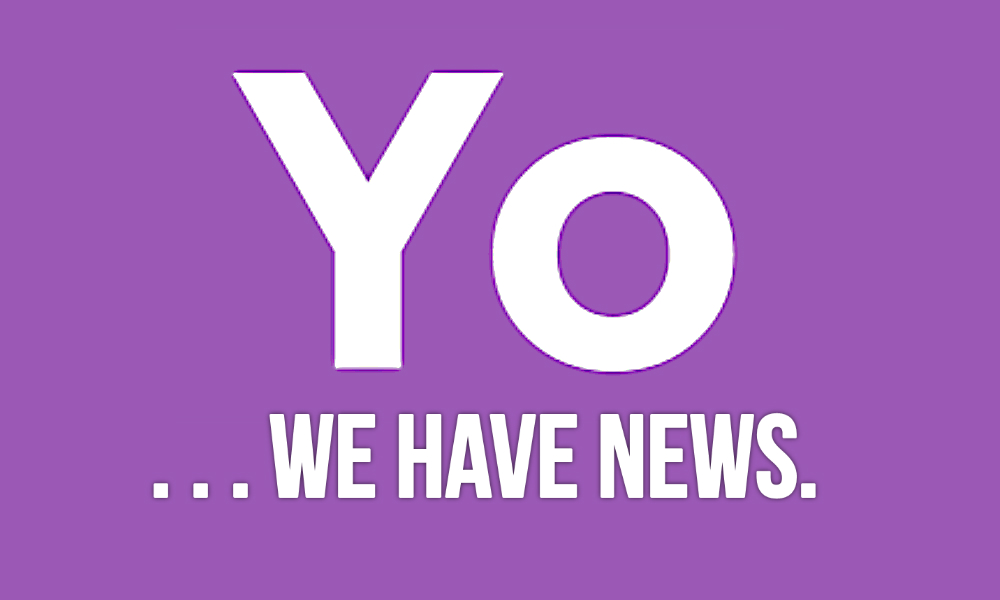 Credit:
Could the Yo app help drive traffic to news stories?
Cory Blair

The concept is simple.

Tap their name on your phone and bingo! You have just sent them a Yo, which appears as a notification and can also be heard audibly.

In the latest update this month, you can now accompany your “Yo” with  links and short hash-tagged messages as well.

And now, The Washington Post among a small group of other news organizations, including The Wall Street Journal, NBC Nightly News and Nieman Journalism Lab, experimenting to see if the app can help drive traffic to news stories.

Yo was developed in eight hours and launched on April Fools Day, 2014. It now has over 2.6 million downloads and 1.2 million active users, according to co-founder and CEO of Yo, Or Arbel.

Yo started in Tel Aviv, Israel, as a simple way to let a personal assistant know that they were needed.

It has since attracted over $2.5 million investment dollars, including cash from Betaworks and Mashable founder Pete Cashmore, according to Vox.

No one is sure what the “Yo” actually means.

Arbel said it can mean anything.

To Israelis, it can even mean, “Yo. There’s a rocket coming.”

The Post is among one of the first news organizations to begin using the app as code for “Yo. We have a news story you might want to read.”

Its social media coordinator said the newspaper decided to use the app in August, primarily to drive traffic to National Security Agency stories, because the paper has a hunch that the “Yo user base will be a little more interested in stories around tech, policy, security, etc.”

How will it work? Every time the Post publishes a story on the NSA or cybersecurity, it will send a Yo to its subscribers. This new strategy was announced on Aug. 19 by Michael Gold, social media producer at The Washington Post, via Twitter. According to Gold, you send the Post a Yo to subscribe, and it will send you links to the various articles.

Hey, @washingtonpost's on @YoApp. We'll YO every new article on NSA or cybersecurity. YO to subscribe, tap for link. pic.twitter.com/5fSLtJ45kY

“We just thought it was an interesting idea worth exploring,” said Justin Bank, audience and engagement strategy editor at The Washington Post.

Despite its interest in Yo, Bank said the Post’s time commitment to Yo is “on the very lightest end of lightweight.” Staff will send Yos when national security stories are published and mention it on Twitter from time to time, but that’s about it. There’s no extensive marketing plan. (And, as of Aug. 20, The Post had yet to send out its first Yo.)

Still, Bank relates the Post’s foray into the Yo app to its first dealings on Twitter, which it started using in 2006. “Seven years, 113K tweets and 3+ million followers later, that was clearly the right call,” said Bank.

Several dozen users followed The Washington Post on the Yo app in the first 24 hours since its launch on Aug. 19, according to Bank, and they have no expectations regarding how many followers they could attract in future weeks and months.

The Post worked with the Yo team to get its name on the app’s index page of accounts to follow. 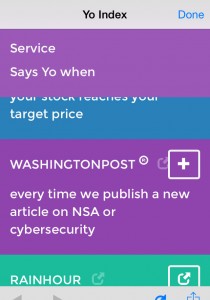 The Yo App index page lists a variety of news organizations using the app in attempts to drive user interest in news.

According to the index page on the app, The Wall Street Journal sends out a Yo every time it publishes a new article, as does Nieman Journalism Lab; NowThis, a news organization designed for mobile users, sends out a Yo to subscribers when “breaking news happens;” and NBC Nightly News sends out a Yo whenever NBC Nightly News airs. (Interesting side note: If you follow the account “Tweetstorm” from the Yo index page, you can also get a Yo whenever venture capitalist Marc Andreessen begins a tweetstorm on Twitter.)

Andreessen himself has joined the discussion this summer on the merits and the meaning of the app.

2/Yo is an instance of "one-bit communication" — a message with no content other than the fact that it exists. Yes or no. Yo or no yo.

Arbel puts it this way:

“It’s a new way for content delivery. It brings the content straight to the notification stream and allows the user to open it with the touch of a button. It’s very fast, and [it’s great] for newspapers.”

According to Arbel, news organizations can send links to their subscribers and even receive statistics to see how many people opened the link.

Although it was created simply for personal communication, Arbel hopes it will continue to spread into the mainstream.

“Why can’t we get a Yo from McDonald’s when the food is ready or from Starbucks when the coffee is ready?” Arbel said. He also mentioned a scenario where diners would get a Yo from a restaurant when their table was ready.

Arbel said he envisions a world where everybody will be able to subscribe to whomever they please, whether it be The New York Times or Starbucks, without having to download a separate app for each service.

Arbel said that Yo doesn’t collect any demographics from its users and he doesn’t plan on incorporating advertising anytime soon.

Arbel said the Post’s strategy regarding the Yo app is a good one.

“I think websites should use Yo only on special occasions, not every article,” said Arbel, “because if you get a lot of Yos you’re simply going to unsubscribe. When you get a Yo, it has to be something special.”

Others are not so sure about The Washington Post’s strategy.

“I think that their execution was off,” said Robert Hernandez, assistant professor of professional practice at USC Annenberg School for Communication and Journalism. He recently tweeted that The Washington Post’s use of Yo was “a wasted opportunity.”

“I’m in favor of innovation and experimentation,” said Hernandez in a phone interview. “I applaud a publication like The Washington Post for experimenting on something as quirky and niche as the Yo platform.”

Hernandez said that the cost to innovate on Yo is fairly low, so it’s worth experimenting and trying things out. What Yo offers, according to Hernandez, is “one-touch engagement,” something unique and potentially useful to news sources.

However, Hernandez said he thinks that The Washington Post is doing it all wrong. According to him, the paper wasted its Yo on NSA stories, when it could have been used for something much more powerful.

“They could have used the Yo notification for something bigger,” said Hernandez, “like whenever an unarmed person dies at the hands of the police, or every time somebody is killed with a gun. The amount of Yo’s would really send a certain message.”

Though Hernandez has ideas, he said even he does not know exactly how to “crack the Yo nut.”

But just a notification every time an NSA story is published? Not very “Yo-worthy,” according to Hernandez.

Representatives from The Washington Post said they are excited to see how their initial plan works, and will be just as excited to follow Hernandez and others in their experiments with the platform.

Hernandez himself said he only used Yo for a short period of time.