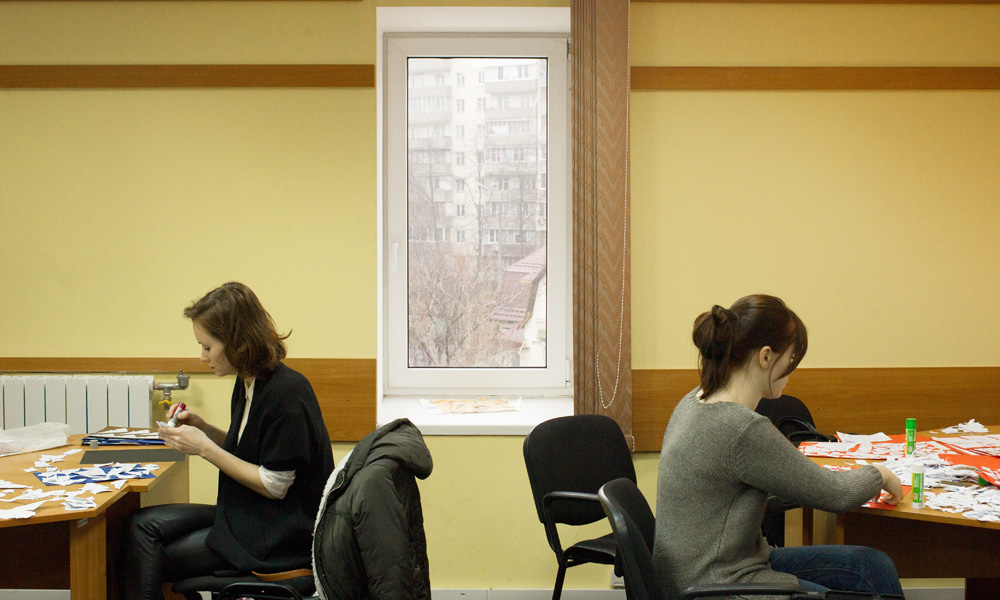 In a small, two-story building in Kiev, ordinary citizens work side by side with journalists, piecing together piles of shredded documents they hope will shed light on the regime of ex-president Viktor Yanukovych who is under indictment for massive corruption.

Office workers skip lunch to glue tiny slivers of paper on colored sheets that are scanned and numbered. Students drop in after classes to help. Parents bring their kids on weekends to sort through piles of confetti found in trash bags outside a conglomerate owned by Serhiy Kurchenko, a billionaire with close ties to the ousted Ukrainian president.

Up to 50 volunteers a day, working in shifts, have stepped forward to help Ukraine’s media make history.

When they fled on Feb. 22, Yanukovych and his cronies attempted to dispose of tens of thousands of potentially incriminating documents by shredding or dumping them into a reservoir on the former leader’s palatial estate.

They didn’t expect what happened next.

Their chief targets: Yanukovych, notorious for his flamboyant lifestyle and Mafia-like business dealings, and Kurchenko, an overnight billionaire at 28 who controlled vast fuel and energy holdings. The two are suspected of collusion in bilking billions from state coffers.

As journalists drilled in, they made astonishing discoveries.

On Feb. 24, reporters, snooping around the vacated premises of VETEK, a company with holdings in energy, banking, media and sports clubs owned by Kurchenko, found 30 trash bags filled with shredded documents.

Media workers transported the material to a safe haven, set up a reconstruction operation and put out a call for volunteers on Facebook. The message went viral. 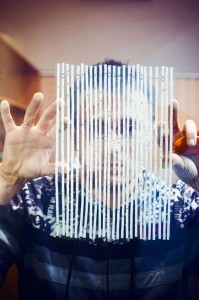 Denis Bigus, an investigative journalist for Zyk TV in Kiev, coordinates the extraordinary media collaboration to put together thousands of shredded documents left behind by ousted Ukranian leaders. Photo By Mari Bastashevski.

The response to the Facebook message was “overwhelming,” says Denis Bigus, a reporter with Zik TV in Kiev, who coordinates the operation. “People from the community arrived to work with us.”

Now the team is seeking technical advice for the next step, which will require a special software application to read each scanned piece, separate it from the others and figure out where it should go. They also need 5,000 sheets of plastic to protect the material that is being meticulously assembled.

The Organized Crime and Corruption Reporting Project (OCCRP), a consortium of investigative reporting centers in Eastern/Central Europe, is providing funding and technical support.

“These shreds of paper will eventually give the reporters a document. Each document is like a piece of the larger picture of what is happening at the nexus of government, business and crime,” says OCCRP editor Drew Sullivan, based in Sarajevo. “Kurchenko was involved in a number of deals that made him rich almost overnight. Hopefully they will have enough to figure it out.”

The Prosecutor General’s Office also is keeping an eye the bags of potential evidence being reconstructed by the team. For the time being, the journalists have negotiated to keep the government agency at bay, but, says Bigus, “They won’t wait for months. They want to conduct their own investigations.”

Journalists hope the reconstructed documents will uncover “big secrets” about Kurchenko’s connections to “The Family,” as Yanukovych’s inner circle was known. The young oligarch, reportedly worth $2.4 billion, made his fortune by buying up Ukraine’s choice assets, particularly in fuel and energy.

According to news reports, the interior ministry has launched 13 criminal investigations for the alleged theft of over $1 billion from the state by oil and gas companies linked to Kurchenko. The European Union has frozen the accounts of Kurchenko and the former president.

The media hit their first jackpot shortly after Yanukovych fled his compound by helicopter. When plastic folders were spotted floating in a reservoir near his sprawling 500-acre estate, known as Mezhyhirya, professional divers were called in. They brought up containers packed with stacks of waterlogged documents from the lake’s bottom and boxes of ammunition.

Sullivan’s February 25 report for the Global Investigative Journalism Network described some of the findings in those containers, “receipts for millions of dollars of cash. Lavish spending on exotic zoo animals and luxury goods. Records of Yanukovych’s sprawling investments. A black list of the local press.” 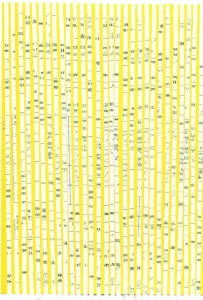 Volunteers in Kiev glue strips of paper to sheets to be scanned, in an attempt to recover original documents that were shredded. Photo by Mari Bastashevski.

Reporters set up a makeshift newsroom in the ex-president’s luxurious quarters to dry out and analyze thousands of files. They scanned and uploaded them to an online portal called “Yanukovych Leaks,” created with the help of OCCRP technicians in the Sarajevo office. Using tools from Document Cloud, the system was quickly up and running. So far, more than 9,500 documents have been posted.

Reporter Anna Babinets was among those who camped out at Yanukovych’s estate that first weekend. It was rainy and windy as she made her way to the reservoir where divers in black wet suits were handing boxes and bags to eagerly awaiting journalists. Cameras flashed as blue folders were pulled out and opened.

When she saw the cache of documents, “I felt like the happiest journalist in the world. I couldn’t believe this was happening with me and in my country,” says Babinets, of Slidstvo/TV Hromadsk.

Veteran journalist Oleg Khomenok, who works with Internews and Scoop, two NGOs in Ukraine, signed on as coordinator, rounding up scanners, volunteers and lamps to dry the clumps of paper. Activists from the Euromaidan opposition movement hired the divers and supplied armed guards.

Sullivan reported that media workers moved into an “opulent guest house,” one of five on the property, and hung a sign, “Journalism Investigation in Process – Do Not Disturb.” Reporters formed teams to look into expenditures of the ex-president’s sumptuous lifestyle and follow the trail of his holdings.

The irony was not lost on Denis Bigus. “For years we had to fight [the government] for every little piece of paper, for every small piece of information,” says the investigative reporter. “Today, we just take it all. Now we are the smart guys and gals. It feels great.” 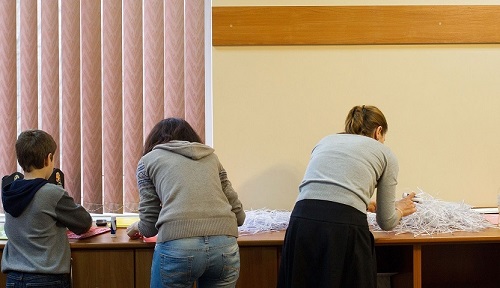 Volunteers do painstaking reconstruction on shredded material retrieved outside a company owned by Serhiy Kurchenko, a billionaire with close ties to Ukraine’s ousted president. Photo by Mari Bastashevski.

OCCRP has been collaborating with journalists and investigative organizations in Ukraine for seven years. Sullivan credits the media professionals with making wise decisions under extreme pressure, especially when it came to preserving documents for posterity sake first and reporting later.

He calls what the reporters have accomplished “amazing.” “They realized that no one group had the resources or knowledge to do this on their own, so they combined forces on the reporting and split up the stories. I am inspired by that,” Sullivan says.

At 10 p.m. Kiev time on March 17, Bigus signed off on a Skype interview about the shredded documents operation.

“We are so tired, but we are excited. We know there still is much to prove. We will be working for months, for years,” he said, over a crackling Internet connection. Once they are reconstructed, the documents will be posted on the leaks website.

Thanks to the media collaboration, Serhiy Kurchenko, who gallivanted around Kiev in elegant Italian suits and fancy automobiles, is less of a mystery today. The dubious deals that made him a billionaire in less time than it takes to earn a college degree are unraveling as reporters bore in. His murky relationship with the ex-president and his businessman son, Olyksandr, is in the spotlight.

The journalists continue to expose details of Yanukovych’s lavish lifestyle.
On February 28, the Kiev Post reported that documents found at his multimillion-dollar estate show that more than $52 million was spent on a set of chandeliers; a set of silverware cost $90,000. One month’s gardening bill ran around $280,000.

The ex-president fled to Russia without his 70 cars and motorcycles, some of them part of a rare antique collection, his exotic birds from Burma and a faux Spanish galleon that doubled as a dining room.

Ukraine’s investigative journalists are “super heroes” for their extraordinary efforts to inform Ukrainians and the world about Yanukovych’s corrupt regime, says Patrick Butler, the International Center for Journalist’s vice president of programs.

“All of this has been led by them. It is completely their work. The bad guys thought they got rid of the evidence by dumping it in the lake, but they were wrong,” says Butler. ICFJ oversees USAID funding for OCCRP and the Ukrainian project.

With the steady flow of documents being posted on Yanukovychleaks.org, the investigations are far from over. “Now is the best time for Ukrainian journalists ever. This is the journalism of the new Ukraine,” says Anna Babinets, who has built a career covering oligarchs and politicians.

Sherry Ricchiardi, Ph.D., is a senior writer for AJR, specializing in international issues, and professor emeritus in journalism at Indiana University.

Confessions of a Clickbait Victim
x

next story
Confessions of a Clickbait Victim
x